We will Keep Texas Red

Last night I appeared on the Ingraham Angle to talk about our work – which has already begun – to ensure that Texas remains in conservative hands. We are pulling out all the stops to make sure we Keep Texas Red and President Donald Trump is re-elected. You can watch the clip from the show here. 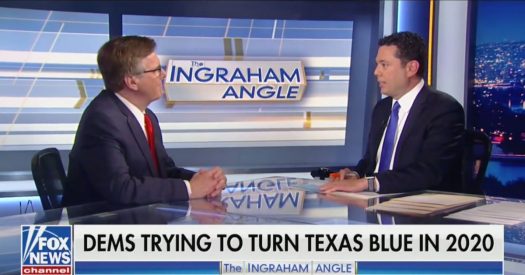 Last week, the Texas Senate passed Senate Bill 2, authored by Sen. Paul Bettencourt.  We are now one step closer to getting Texans the tax relief they so desperately need.  In case you missed it, here’s my video statement on the passage of Senate Bill 2.

Disorder at the Southern Border 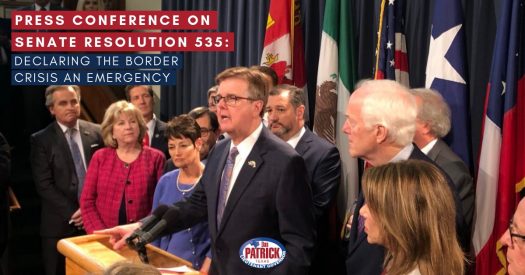 Since I have been Lieutenant Governor, I have allocated $1.6 billion in the budget for additional boots on the ground at the border, as well as boats and other surveillance equipment. We have put an additional $800,000 in the new budget. The Texas Senate adopted Senate Resolution 535 to make it crystal clear to Congress that the situation at the border is an emergency. I talked to the president personally about the resolution and it was hand-delivered to his office. It is clear that we must take immediate action to secure the border. Click here to watch the press conference on SR 535 – Declaring the Border Crisis an Emergency. 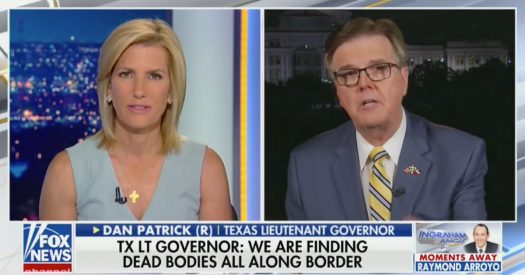 I was on Fox News with Laura Ingraham last week talking about the border crisis. Click here to watch the interview. 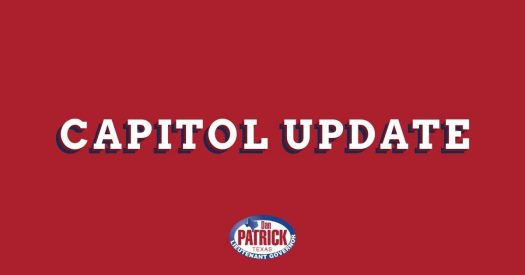 Several important conservative bills passed the Texas Senate last week, including Senate Bill 9 – Enhancing Election Security, authored by Sen. Bryan Hughes, R-Mineola. Citizens must be confident in the integrity of their elections; SB 9 increases criminal penalties against those who commit voter fraud and corrupt our elections and helps protect the right of every Texan to know their vote is secure.

Our brave law enforcement officers put their lives on the line for us every day and we need to do all we can to support their efforts. Law enforcement officials around the state have talked to me about staffing shortages.  They believe that Senate Bill 16 – Police College Loan Forgiveness will be an excellent recruiting tool.  SB 16 is authored by Sen. Kelly Hancock, R-North Richland Hills, and was unanimously passed the Texas Senate.  It will help repay student loans for officers who choose to serve in local law enforcement post-graduation. We must always #BackTheBlue.

Voters shouldn’t have their taxpayer dollars squandered to pay for hired-gun lobbyists who too often are working against taxpayer interests. Senate Bill 29 – Stop Taxpayer Funded Lobbying, authored by Republican Sen. Bob Hall of Edgewood, is a principled conservative reform that is long overdue. Passed by the Texas Senate last week, SB 29 will make sure that local tax dollars are spent on citizens, not lining the pockets of lobbyists. 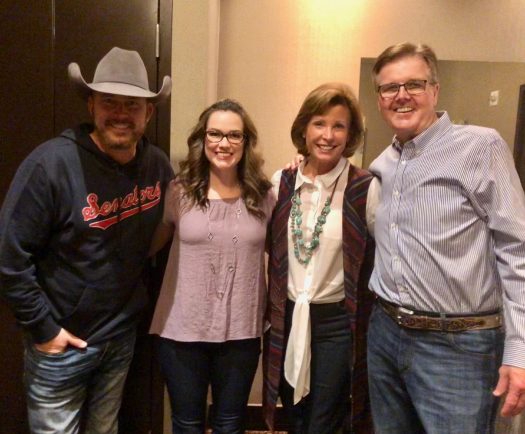 Like many Texans, Jan is a big fan of Chad Prather and this weekend I took her to see him as a belated birthday present. Here is our photo along with his wife Jade. He is a great conservative humorist. You can check him out on social media and The Blaze, where he is regularly featured.

I hope you all had a blessed Easter this past weekend. On the lighter side of the holiday weekend, consider this – Americans ate an estimated 16 billion jelly beans on Easter, enough to circle the earth three times laid end to end. Jelly beans were first seen in America during the Civil War. Their popularity soared under President Ronald Reagan, and jelly bean sales doubled in one year during his term to 18 million. They were his favorite.