President Donald J. Trump loves to visit Texas and it is always great to have him here. He has visited Texas 16 times since he was elected. I was honored to meet him when he arrived on the tarmac in Midland on Wednesday and West Texans were glad to see him. He drove to Odessa for lunch and then drove West of Midland to an oil rig. There were over a thousand people along the route where his motorcade traveled, even though it was 103 degrees! (I grabbed a shot below). The President brought a strong message of support to Texas oil and gas producers – signing 4 permits that will allow Texas to export crude oil to Mexico. His visit was one more reminder why the November election is so important. Joe Biden has pledged to ban fracking on day one and to destroy the oil and gas industry – killing millions of jobs in Texas and devastating our economy.

Also, check out this great shot of an oil rig with the Texas and U.S. flag (below). Along with Senator Ted Cruz, Governor Greg Abbott and Attorney General Ken Paxton, Texas State Senator Pete Flores, R- Pleasanton, was also on hand. 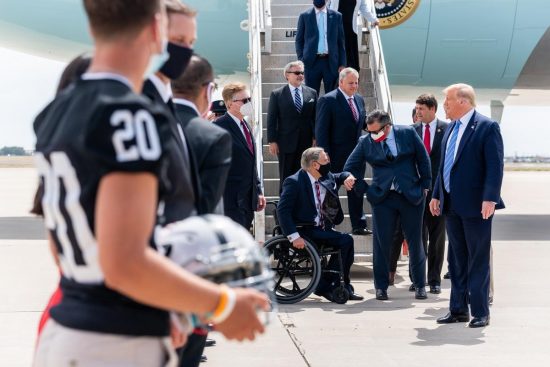 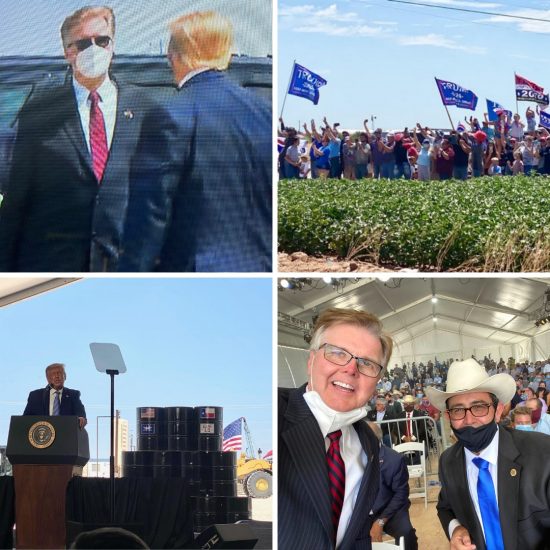 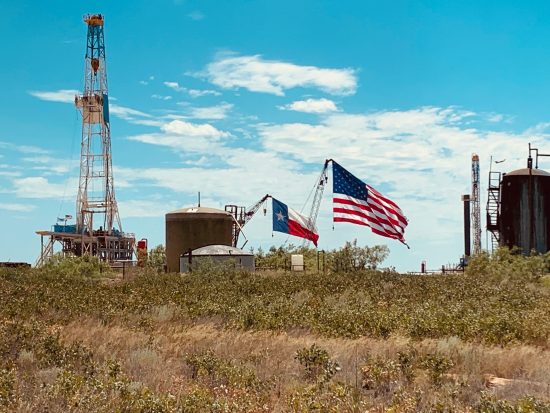 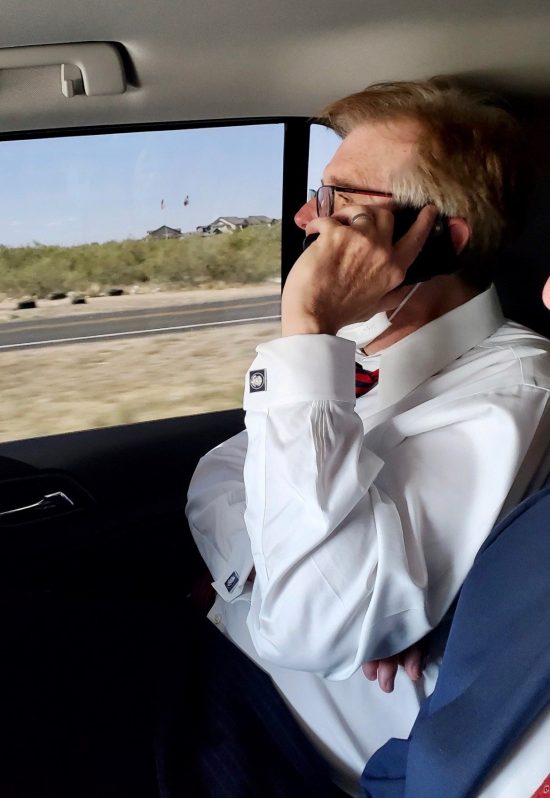 A funny thing happened when the President was finished with his visit. I was traveling behind him in the motorcade on the way to the airport and was all set to call in to the Rick Roberts Show on WBAP Radio in Dallas. However, just as I was about to go on the air, I had to put Rick on hold to take a call from the President! At least I could tell Rick I had a good excuse. I talk about the call and the President’s visit in the interview. You can hear it here. 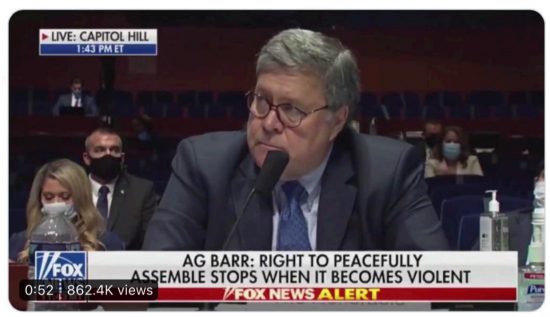 The Democrats put on a shameful spectacle on Tuesday at the U.S. House hearing with Attorney General William Barr. Their outrageously rude behavior provided the country with another clear picture of exactly who they are. Their inquisition, with non-stop denials that cities are burning, was an assault on the intelligence of every American. Again and again, they insisted the violence and destruction we have seen in cities like Portland were “peaceful protests.” As I tweeted out following the hearings, they have not only lost their moral compass, they appear to have lost their minds. Check out this supercut of Democrats continually interrupting AG Barr to “reclaim their time.”

Parents & School Boards Should Decide When to Open Their Schools…

…not local Democrat officials. Click here to read my statement. 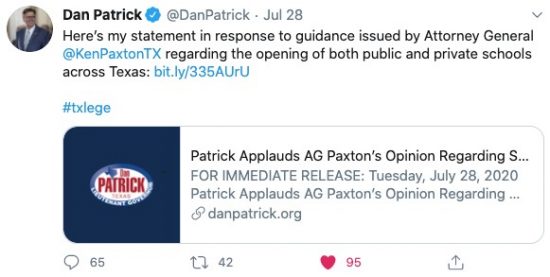 You can also read the official statement made Friday  by Governor Abbott, myself and House and Senate leadership with more information on guidelines for opening schools.

Last week, a small business alliance predicted that Texas would be one of the first states to bounce back from the pandemic and the economic shutdown for several reasons, including the fact that our economic position was strong to start with and we have substantial financial reserves. The next day, the Dallas Morning News published an editorial that the state was in “shambles.” I wrote them a letter about it. You can read it here. 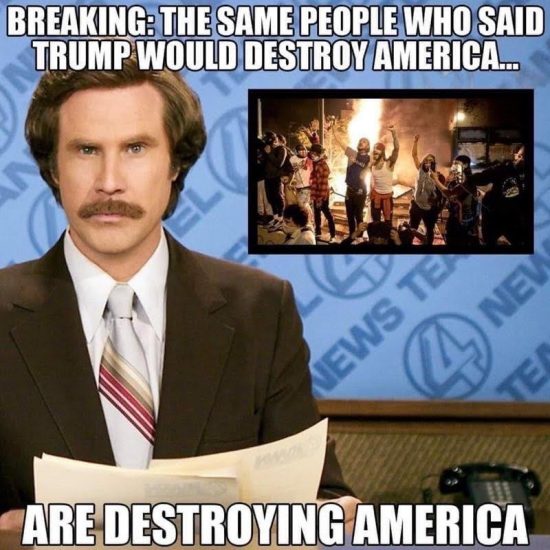 In case you missed it, Governor Abbott released a letter yesterday asking me to lead the Texas delegation to the Republican National Convention in Charlotte later this month. I look forward to representing millions of Texans who are committed to re-electing President Trump.  I will keep you posted as we get closer to the Convention. 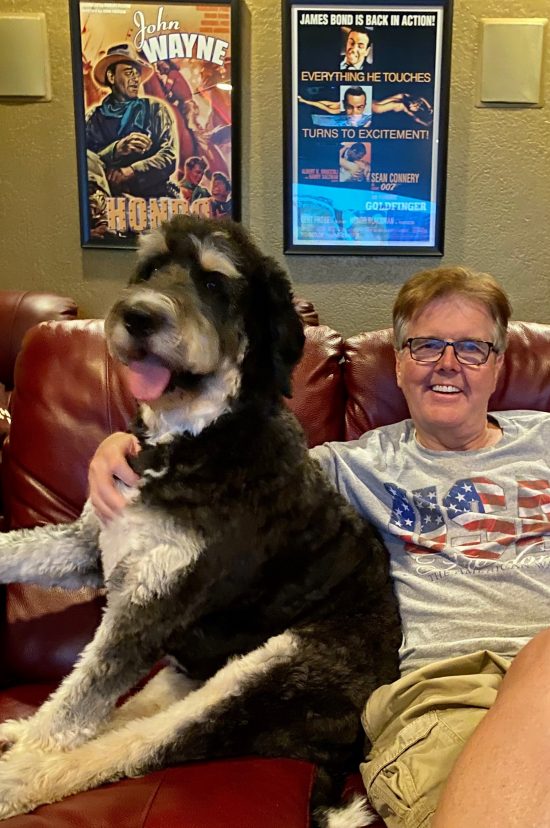 I want you to meet our granddog, Otis. He’s a 120 pound, 9 month old Bernese Mountain dog crossed with a poodle – a Bernedoodle. He’s smart, fast and big. There’s so much to do these days that I don’t often have time to watch movies, but when I do, he loves to join in.

Please continue to keep our state and our nation in your prayers. Pray for the families who have lost loved ones to the coronavirus and for our heroic health care workers. And, as always, keep our law enforcement officers in your prayers. May God bless you and your family, and may He continue to bless the greatest state of all—Texas.