Travis, Bowie and Crockett would be proud 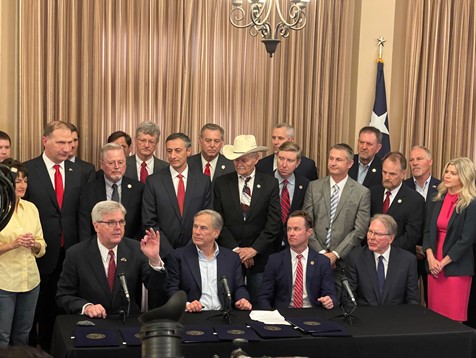 What better place than the Alamo to sign HB 1927, Constitutional Carry – which restores our Second Amendment rights and affirms Texans’ right to defend themselves. On Friday, I joined Governor Greg Abbott and other legislators who had backed Second Amendment bills this session for the ceremony.

Travis, Bowie and Crockett would be very proud.  HB 1927 is an historic bill that can become a national model. It protects the rights of gun owners, as well as the safety of those in law enforcement. Congratulations to Rep. Matt Schafer, R-Tyler and Senator Charles Schwertner, R-Georgetown, on its passage. I also thank the NRA, Gun Owners of America and many in law enforcement for working with me and the Senate almost every day to help write and pass the bill. The Senate passed HB1927 faster than any major House bill this session. 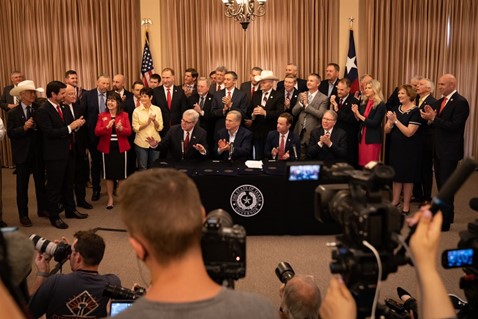 As a longtime Second Amendment advocate and NRA member with a perfect NRA voting record, I am especially proud that we have passed 17 strong Second Amendment bills the last two legislative session – more than any other state.

Many Second Amendment rights advocates were at the Alamo for the signing ceremony.  It was great to celebrate this victory with them. 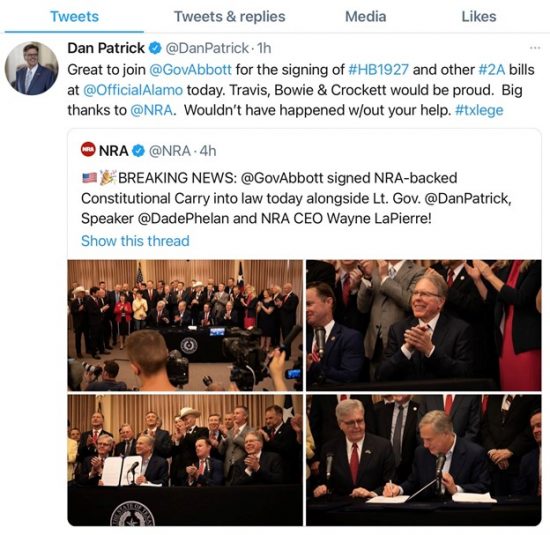 Signing Constitutional Carry wasn’t the only history made in Texas this week.  As I reported in my last email, I joined Governor Abbott in Austin to take the first steps in building a border wall in Texas to help stop the current surge of illegal immigration resulting from Biden’s open border policies.  I’ve signed thousands of bills and documents as Lt. Governor, but signing the authorization for the first $250 million to begin the Texas Border Wall is one of the most important for me as Lt. Governor and for the history of our state. One of the legislators standing behind me at the event grabbed this shot. 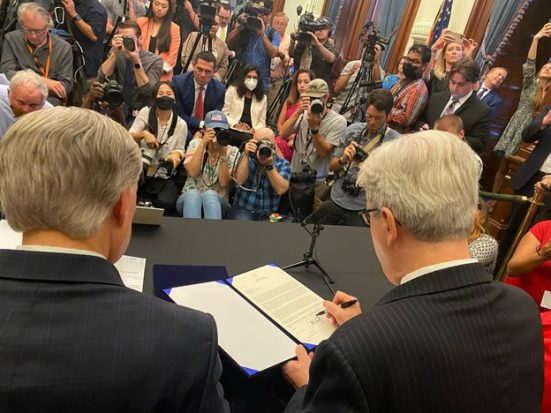 During the regular session, the Senate passed several important bills that did not pass the House.  I have asked Governor Abbott to add these bills to the call when he convenes the Special Session:

I have also asked the Governor to add other key bills to the Special Session, including legislation to strengthen the ban on the teaching of critical race theory in Texas public schools.  This week he announced that he would do that.

I am also continuing to work on legislation that will help ratepayers who are impacted by the February storm. The Senate passed a bill with 3 billion dollars in credits for residential ratepayers. Sadly, it failed to get approval in the House.

Every session, I get lots of questions about how many bills passed and how many didn’t.  Here’s the breakdown.

The Senate passed 26 of 29 of my low number legislative priority bills this session.  I will continue to work to pass the bills that died in the House in the Special Session.

The Texas House sent 1,261 bills to the Texas Senate.  452 of those bills had no Senate sponsor and consequently, almost no chance of passing because there is no Senator to get it through committee or to the floor.

The Texas Senate sent 672 bills to the Texas House.  EVERY Senate bill we sent to the House had a House sponsor.

That’s the final tally on the 87th Regular Session.  Now, onto the Special!

I hope you had a blessed Father’s Day today.  Two of my grandsons who are learning to shoot wanted to go shooting with me and my son-in-law today.  What a great way to spend Father’s Day.  Nothing like hitting a clay target! 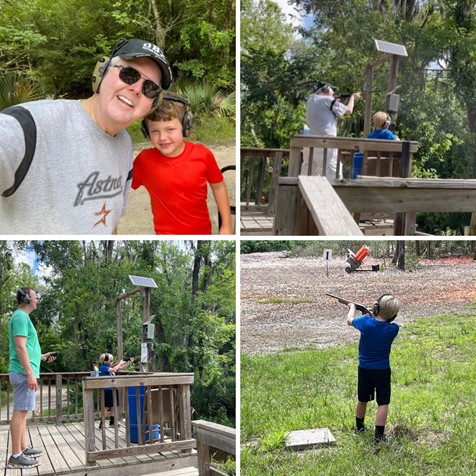