The leftist attacks on our traditional values sadly continue…

The NAACP is now urging pro athletes not to sign with any teams in the Lone Star State due to policies Texans support! It goes without saying, the NAACP is totally wrong.

I joined Utah Congressman Burgess Owens on Laura Ingraham’s program late Friday night to state the facts about our policies here in Texas, which a majority of Texans support.

You can watch the interview here. 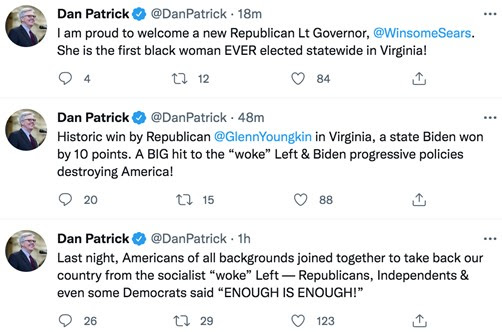 Congratulations to Republican Glenn Youngkin in Virginia, a state Biden won by 10 points. A big hit to the “woke” left and Biden’s progressive policies that are destroying America!

As Kamala Harris said, “What happens in Virginia will, in large part, determine what happens in 2022, 2024, and on.” And for the first time, I agree with her. 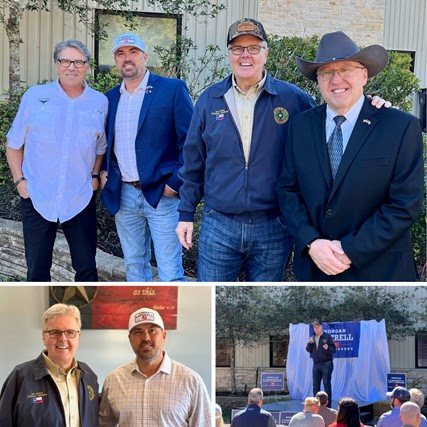 I am proud to endorse former Navy Seal Morgan Luttrell to replace Kevin Brady in Congress. I was in Magnolia, Texas on Saturday for the grand opening of Morgan’s campaign headquarters. I joined Former Governor Rick Perry and Justice of the Peace Wayne Mack, who spoke to the gathering as well. Morgan is a great candidate and will be a great Congressman. You can visit morganluttrell.com to learn more.

Morgan grew up in the district, owns and runs a small business in the district, and he is raising his family in the district. Morgan is the warrior the people deserve in Congress. He’s a fighter who will stand up to the radicals in Washington, DC and ensure our conservative Texas values are represented.

Congratulations to Michele of Arlington, Texas for winning our second bat giveaway. She will be taking home a bat signed by Astros legend Jose Altuve! Watching our Astros this past week was incredible. Even though they did not win, they played with heart and Texas is proud of them.