The fight for conservative principles

Election Day on Tuesday was a win for conservative principles in Texas — for efficient and non-intrusive government that allows the economy to grow and Texans to thrive. It was a win for life and religious liberty and a clear message that border security matters. It was a win for the serious effort to actually improve the performance of our public schools and to stop skyrocketing property taxes from crippling homeowners.

These ideas, rooted in the conservative principles that you and I share, were under attack by a socialist progressive with $80 million dollars and a skateboard. But thanks to you and millions of others across Texas, the conservative majority prevailed.

We knew this would be a national election as well as a Texas one. Democrats are bitter, angry and motivated. They wanted a blue wave and I began campaigning almost a year ago to ensure that Republicans all across Texas got out to vote to make sure it didn’t happen here. Despite relentless attacks from the mainstream media, I received 1.5 million more votes in this election than I did in 2014 when 4.6 million people voted. This year, 8.2 million voted and while the news reports were all about the increase in Democrats going to the polls, Republicans broke records too and re-elected me and other statewide leaders who share the common-sense priorities of Texans.

Texas Democrats made the same mistake they always make — they confuse personality with principle and think Texans will fall for a big star. Last time it was Wendy Davis and her pink tennis shoes and this time it was all the hoopla around Beto. They just don’t get it. The conservative majority in Texas is not built on personality politics — it’s not about me or Greg Abbott — it’s about what we stand for. Throughout the campaign, the conservative majority in Texas knew that despite the Hollywood ads and sleek signs, the Democrats were pushing the same old platform to turn Texas into California — big spending and high taxes, open borders, job-killing regulation and no respect for life or religious liberty.

Unfortunately, we lost some great state senators on Tuesday night — Konni Burton in Tarrant County and Don Huffines in Dallas County. We also lost too many important conservative judges throughout the state. In almost every case, straight-ticket Democrat voting trickled down the ballot to defeat them. I campaigned hard for the straight-ticket Republican vote this election to counter the Democrats, and more Republicans voted straight ticket than ever before. This is our last year for straight ticket voting in Texas. Only 7 states still allow it.

I wrote legislation to end straight-ticket voting in 2009 and after I became Lt. Governor, I was finally able to get it passed. In the next election, every candidate will win or lose based on their record and the platform they put forward to voters. This will give us better leaders and better government.

The fight for conservative principles in Texas will continue. We have three new conservative senators who will help us in the fight — Angela Paxton from Collin County, Pat Fallon from Frisco and Pete Flores from Pleasanton and South Texas. I intend to push forward to make sure Texas continues to lead the nation in both productivity and principle. I won’t back down. 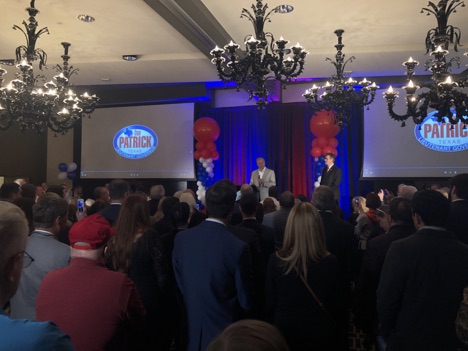 Happy Veterans Day to those who served. We are so thankful for your service.

I appreciate your continued support.

May God bless you and the great state of Texas.