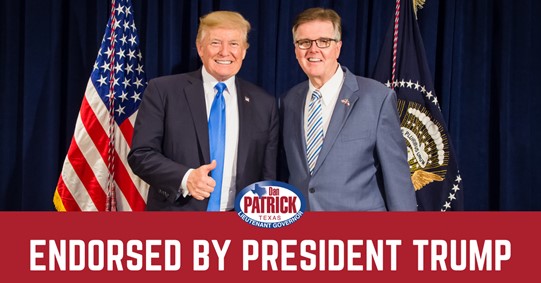 “Lt. Governor Dan Patrick is outstanding and has my Complete and Total Endorsement.”

I am honored to have President Trump’s endorsement for my re-election in 2022.  Over the last five years, he and I have become good friends. Thank you, President Trump, for your support. Click here to read my statement or here to share it on Twitter! 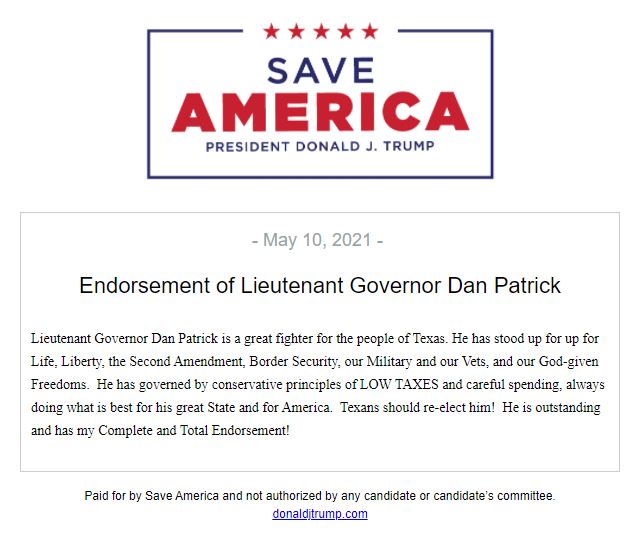 When I first announced that I was running for re-election in 2022, President Trump was still in office, the country was moving forward and I had every reason to believe that Texas was on a path to become even greater. 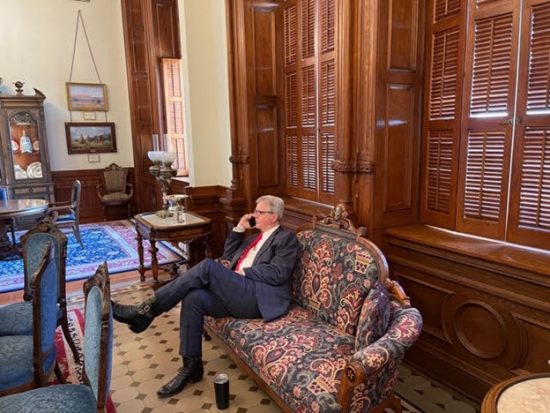 I had a long talk with the President this week and we discussed the disastrous failures of the Biden administration – especially what happened on the border.  I gave him a full briefing on what is going on in Texas and told him that under his policies that we had actually gotten control of the border.  Now, as Texans know, it is worse than it has ever been.

I am very proud of what we have accomplished this legislative session.  With two weeks to go, 26 of the priority bills I identified at the beginning of the session have passed the Senate and are working their way through the House or are in conference committee. They are on track to go to the Governor’s Desk by the end of the legislative session.

As you may know, most priority bills end up going to a conference committee where five members from the Senate and five members from the House work out any differences and agree on the final legislation.  Those committees are meeting now on many of these bills.  THE TEXAS SENATE HAS ALREADY PASSED THESE BILLS (BELOW) TO THE HOUSE.  I am working with the Speaker to move these bills, as well as conservative House bills, to the Governor’s desk.

As you can see, my priorities include legislation that affirms our commitment to Life, Liberty and Conservative Texas Values. This includes SB 8, the Heartbeat Bill, which was sent to Governor Abbott this week, SB 9, the Abortion Trigger Ban, Second Amendment and religious liberty bills and, of course, SB 29, to protect women and girls’ sports.  We are working hard to get SB 19, which will stop corporations from discriminating against the gun industry, through the House next week. The Firearm Industry Trade Association calls SB 19 a national model and the most important step taken in support of their industry in nearly two decades.

I have also included legislation that will Protect Taxpayers and the Texas Economy, including SB 10, to finally end taxpayer funded lobbying and SB 13, the Oil and Gas Investment Protection Act, which will prohibit financial institutions that boycott the oil and gas industry from doing business in Texas.   SB 6 will make sure that no business, large or small, can be hit with a frivolous lawsuit as a result of the pandemic.

The remaining legislation will ensure a Safe and Secure Future for Texas, starting with Senate Bill 7, the Election Security Reform Bill – a top priority for me and all conservatives.  I am committed to passing legislation that will protect our elections, making voting uniform in every county and ensure transparency at every step of the process.

SB 2 and SB 3, massive bills to reform ERCOT and fix many of the problems we encountered during Winter Storm Uri in February, are also moving forward.

I am working with the Speaker to pass Constitutional Carry, House Bill 1927, which I moved through the Senate in record time, working with law enforcement and gun advocates to get the votes needed to pass the bill.  House Bill 1927 is now in conference committee and, as you can see, Speaker Dade Phelan and I are optimistic we will get a great Second Amendment victory on this important bill very soon. 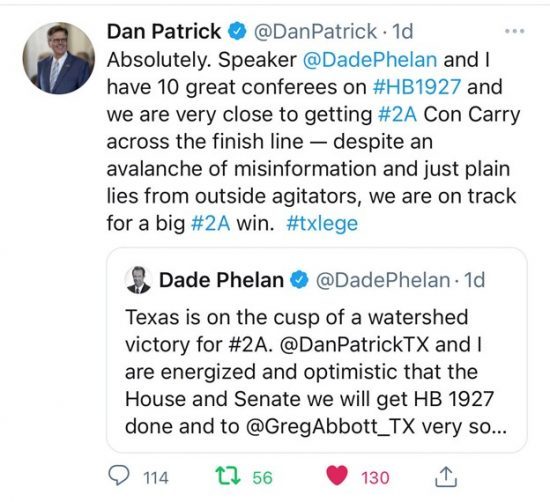 Priority bills aren’t the only legislation I am committed to passing.  The Senate passed SB 2202 to stop the “woke” teaching of divisive critical race theory in Texas schools.  Any philosophy that teaches that one race or gender is inherently superior to another race or one gender or that one race is inherently racist, sexist or oppressive should not be taught in our classrooms.

The border crisis continues to be a disaster – all designed by the Biden administration. I spoke with Laura Ingraham about it on Monday night — in case you missed it.

Legislative Update on “Inside Texas Politics”

I was on WFAA’s Inside Texas Politics with Jason Whitely last Sunday to talk about several issues we are working on in the last days of the session. Click here to watch the interview.

In Case You Missed It

It was absolutely great to meet a Texas hero this week – the amazing Drew Pearson.  We honored him on the Senate floor. 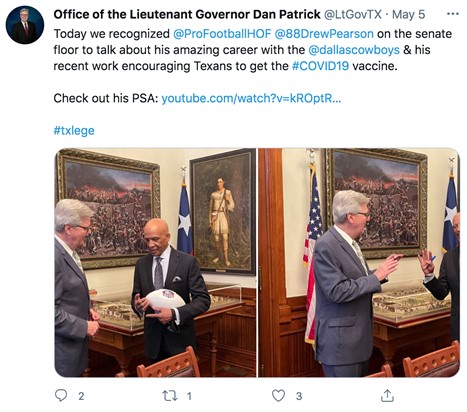 Since I have been Lt. Governor, over 50 law enforcement officers have died violently in the line of duty.  This past week, Concho County Sheriff Deputies Samuel Leonard and Stephen Jones were shot.  It was a tragedy for their families — both were fathers who left small children – and their community.  Today is Police Officers Memorial Day so we are more aware than ever of the sacrifice our law enforcement officers make to keep us and our families safe.  They put their lives on the line for us every day.  Please keep the people of Concho County in your prayers and never forget to back the blue. 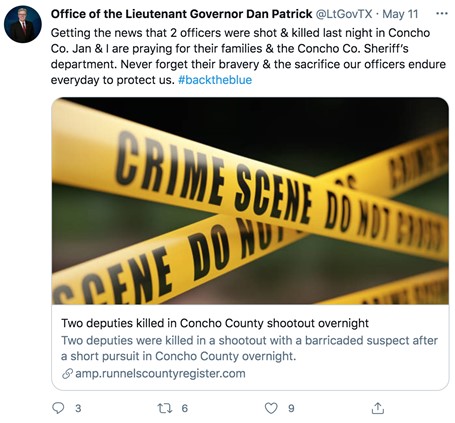