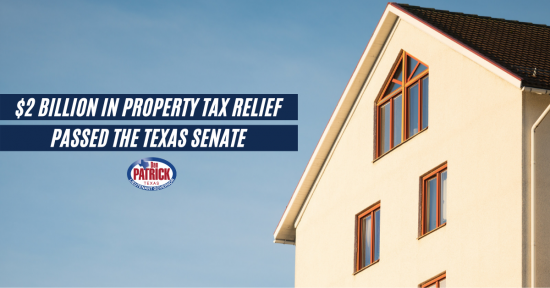 Last Monday, we kicked off the start of our Third Special Session. We have a lot of important work to get done, and property tax relief is at the top of my list. Senate Bill 1, passed by the Senate 30-1, guarantees $2 billion in property tax relief, and that amount could rise to a total of $4 billion for the current biennium if our surplus revenues grow.

Senate Bill 1 follows the clear and simple principle that as Texas’ economy grows and the state receives surplus revenues, a portion must first be returned to taxpayers because it’s their money. This signifies a quantum shift in the way we think about spending our surplus dollars. Texas homeowners must receive tax relief before we commit to any new spending! 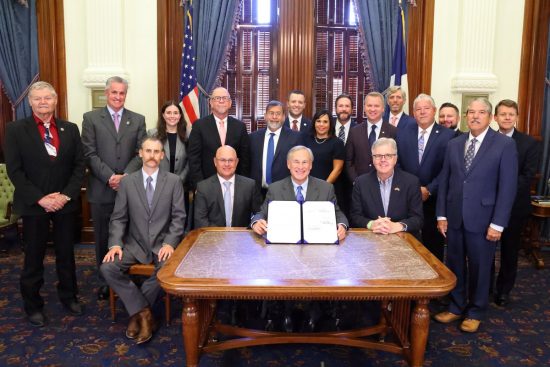 I joined Governor Abbott last week as he signed the Damon Allen Act, Senate Bill 6, into law at the Capitol. Too many Democrat Judges are releasing criminals back on the streets to commit more crimes.

This bill prohibits violent or repeat offenders from being released on personal bond and mandates judges to consider the offender’s criminal history before setting bail. This legislation will keep Texans safe and keep violent criminals off the streets. 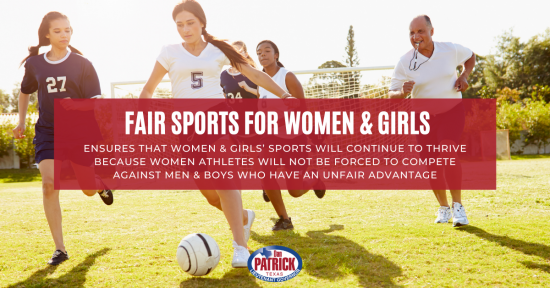 Women have fought for equality in sports for decades, and they have achieved enormous success along the way. It is not fair to allow boys to compete in girls’ sports. In Texas, we refuse to deny any woman or girl athlete the right to compete on a level playing field and to be the best in their sport.

We cannot allow our women to be pushed out of athletic scholarships and out of sporting excellence. This is the fourth time we have passed Senate Bill 3, the Fair Sports for Women and Girls Act, out of the Senate this year, and we will continue passing this bill until it finally becomes law in Texas. 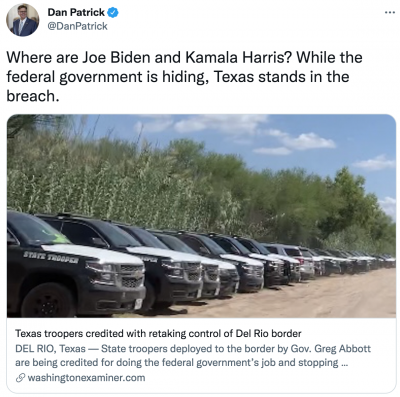 State troopers deployed to the border by Gov. Abbott are being credited for doing the federal government’s job and stopping thousands more migrants in Mexico from illegally crossing into the United States, after well over 15,000 made it through here late last week.

Let me be clear: Texas will move to secure the border with or without the federal government. 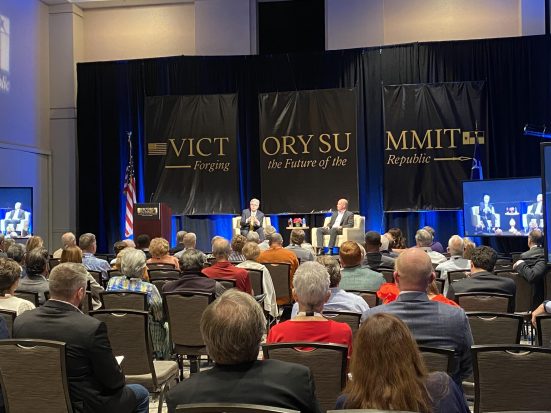 On Friday, I spoke at Texas Public Policy Foundation’s Victory Summit, where I recapped the special sessions and talked about other legislative action and pro-liberty policies that will help keep Texas, Texas. There was a great turnout. 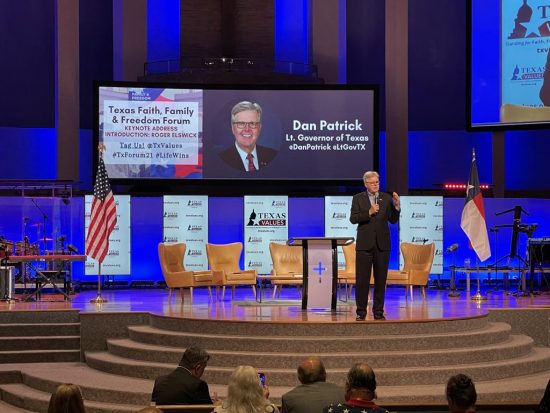 I was proud to join nearly 500 Christian Conservatives from across the state at the Texas Values Faith, Family & Freedom Conference. It is always great to be around like-minded Texans who are dedicated to preserving life and advancing our shared, conservative values. Thank you for having me. 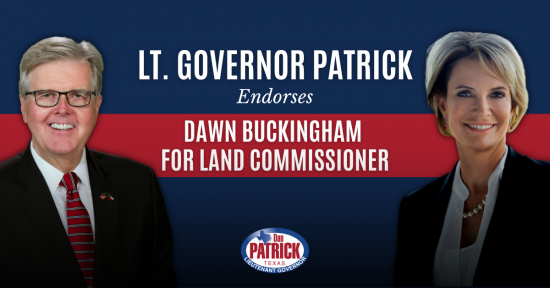 I am honored to endorse my good friend Senator Dawn Buckingham for Texas Land Commissioner. Dawn is a proven, conservative fighter the people of Texas can count on to secure our border, protect private property rights, defend the Alamo, and take care of our brave veterans. I look forward to continuing our work together. Click here to read my statement. 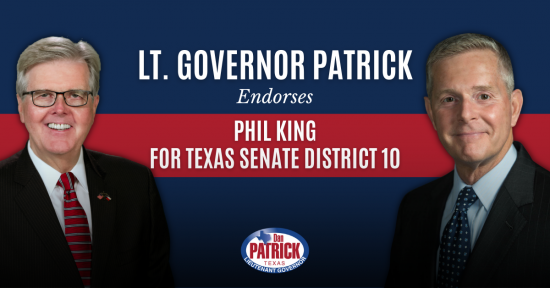 I have known and worked with Chairman Phil King of the Texas House for 14 years. His lengthy legislative experience, background in law enforcement, and strong leadership skills are what we need in the Texas Senate. Therefore, I am giving my full endorsement to conservative Rep. Phil King for Texas Senate District 10.

Remaining Accountable to the People of Texas 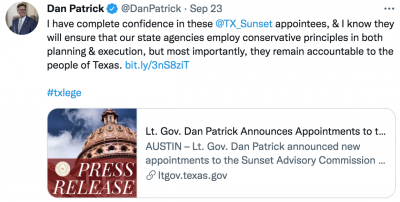 In case you missed it, I announced new appointments to the Sunset Advisory Commission.

The Sunset Advisory Commission’s job is to make sure that Texas state government remains as lean, effective and efficient as possible. I have complete confidence in these appointees, and I know they will ensure that our state agencies employ conservative principles in both planning and execution, but most importantly, they remain accountable to the people of Texas.