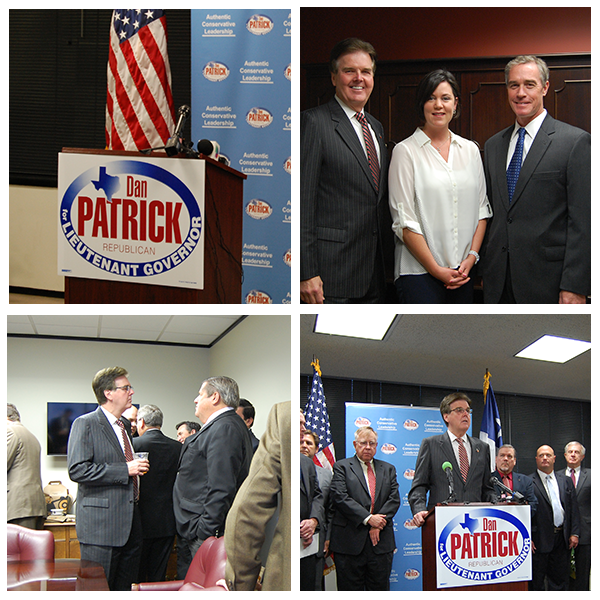 “During his seven years in the Texas Senate, Dan Patrick has consistently showed his support for small business,” said Will Newton, NFIB/Texas Executive Director. “His priorities align with those of NFIB, which is shown through his record of standing for free enterprise, limited government, and supporting entrepreneurship and small business.  Senator Patrick understands the value of small businesses and the jobs they create.  We are pleased to support him.”

“As a small businessman, I am honored to receive the endorsement of the National Federation of Independent Business,” said Patrick. “Because of my legislative record, as a pro-business Senator, businesses recognize my efforts of keeping taxes low, protecting our tort-reform successes, and encouraging a business friendly environment for entrepreneurs.”

NFIB’s mission is to promote and protect an individual’s right to own, operate and grow their business. Founded in 1943, and headquartered in Nashville, Tennessee, the NFIB is America’s leading small-business advocacy association.  A nonpartisan, nonprofit association, NFIB has 350,000 small and independent business owners across the nation.

During the press conference, business leaders from across the state accompanied Sen. Patrick in support of his candidacy and pro-business legislative career.

“Throughout my entire legislative career I have been a staunch supporter of businesses and the jobs they create,” said Patrick. “During the recession, I helped pass the biggest tax cut in the nation because I believe businesses are the backbone of our economy. As, Lieutenant Governor, I will continue to champion economic prosperity and the entrepreneurial spirit that helps keep Texas leading the nation in job creation.