SB 1 has passed the Texas Senate

Democrats who fled for DC yesterday left the Texas House without a quorum, but the Texas Senate had a quorum and today we passed Senate Bill 1 – the Election Integrity Bill. Despite the lies the Democrats have told about this bill, it will ensure that every Texan can trust the outcome of every election in Texas. SB 1 will strengthen verification of mail-in ballots, expand hours for early voting, ensure that no election machine is connected to the Internet – so there will be no hacking – and it will allow all of us to watch votes being counted on election night because larger counties will now be required to livestream the voting tabulation process.

Texas Democrats who traveled to Washington are lobbying in support of a federal voting bill that Texans do not want. According to a Texas Association of Business poll conducted in April, 65% of Texans “do not believe election law should be federalized and do not want U.S. Congress to dictate Texas election law.”

Final passage of Senate Bill 1 will require the House Democrats who have fled the state to avoid voting on this bill to return to the Texas House for a quorum. If they do not, this bill will die, but the Senate will continue to pass SB 1 over and over again until the House finally has a quorum.

Before I gaveled in the Senate this morning, I talked about Senate Bill 1 with Bill Hemmer. Click here to watch the interview.

We are calling them the Miller D’s 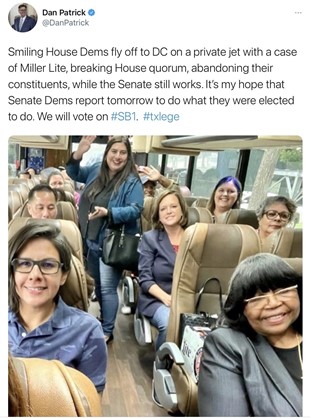 The Election Security Bill: Here are the Facts

I joined Laura Ingraham on her program last Friday to lay out the facts regarding the Election Security Bill. Texans deserve to have confidence that their votes are counted in a free and fair election, and this bill will do just that. You can watch that interview here.

Before gaveling in the Texas Senate for the Special Session last Thursday, I spoke with Bill Hemmer about the agenda. I am committed to passing all of the legislation on Gov. Abbott’s call, with election integrity at the forefront. Watch it here. 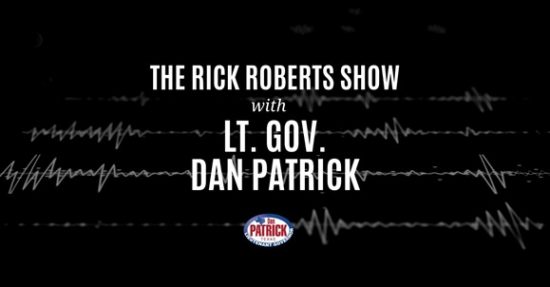 July 7th marked the anniversary of the tragic loss of five law enforcement officers in Dallas. I joined Rick Roberts on WBAP | The News and Talk of Texas out of DFW on Wednesday afternoon to honor these officers and reflect on that very solemn day in 2016. We will never forget. Click here to listen.

I remain grateful for the opportunity to serve as Lt. Governor and I am thankful for the generosity of those who have contributed to my re-election campaign. I look forward to continuing the work we are doing to make the greatest state in the nation even greater. You can read my statement here.