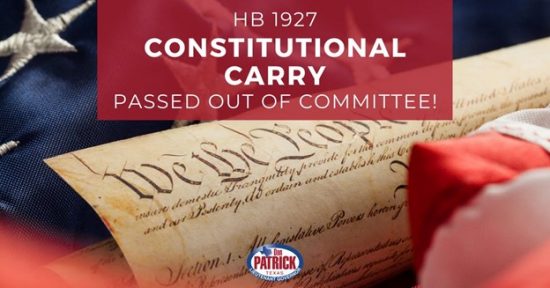 It’s not just the left-wing media that pushes “fake news.”  I couldn’t believe it last week when I heard some conservatives saying that House Bill 1927, the permitless carry bill, was stuck in the Texas Senate. Here are the facts:

HB 1927 arrived in the Texas Senate on April 19.  On April 23, I appointed a new committee – the Special Committee on Constitutional Issues – chaired by Senator Charles Schwertner, R-Georgetown, a strong Second Amendment Rights advocate, along with 4 other Republicans Senators – Brandon Creighton, R-Conroe, Brian Birdwell, R-Granbury, Dawn Buckingham, R-Lakeway and Bob Hall, R-Rockwall, all of whom had already voiced their support for the bill. I referred HB 1927 to that committee and last night, April 29, that Committee held a hearing on the bill.  After hearing testimony from gun groups, law enforcement and over 200 Texans, both in support and opposed to permitless carry, the Committee voted the bill out 5 to 2.  Here is the tape of the hearing if you would like to listen. There were some great speakers. I plan to bring the bill to the Senate floor for a vote next week – so rather than being “stuck,” it moved in near record time – about as fast as we can pass a House bill under the Senate rules. 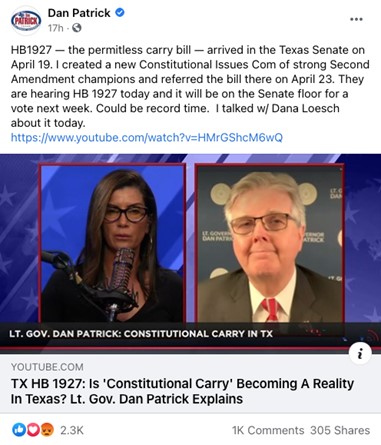 I joined Dana Loesch on her national program during yesterday’s hearing to talk about the bill.  In case you missed it, you can click here to listen to our conversation. 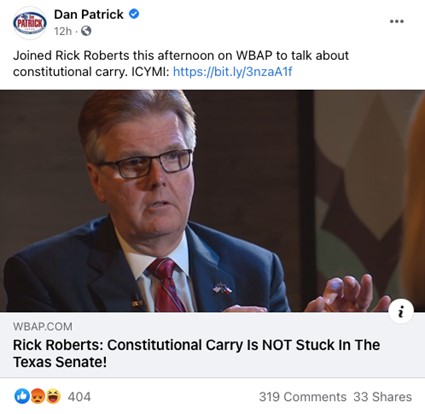 I also spoke with Rick Roberts on NewsTalk 820 WBAP out of DFW to clear up some of the myths about HB 1927.  Click here to listen.

Critical Race Theory Has No Place in Texas

I know many of you are following the outrageous critical race theory ideas that are worming their way into our public schools.  These are the people who are pushing the idea that America actually began in 1619, when the first slaves arrived in Virginia – a notion even liberal scholars admit is bunk.  They are also trying to teach our children that being white automatically makes you a racist, whether you realize it or not.  SB 2202, by Sen. Brandon Creighton, R-Conroe, passed the Texas Senate last week.  It will ensure that these divisive so-called “woke” philosophies cannot be taught in our public schools.  Here’s my official statement on it: 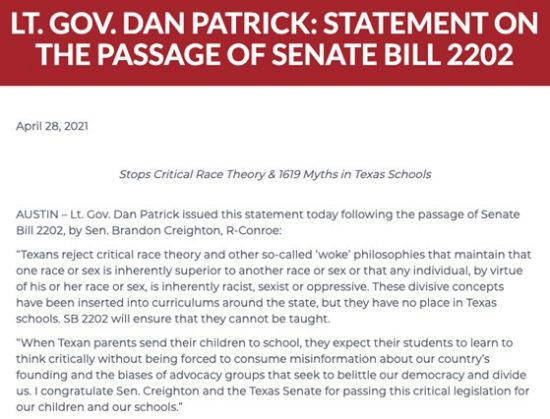 We Can Rise Above It

I was on Laura Ingraham’s program recently talking about how divisive the left has become and what we need to do to bring America together.  The media, the Marxists, the socialists, and the shysters want to tear us down, but I am convinced we can rise above it. Here’s a short clip.

This Must Be Fixed: A Blowout Profit on Texas Winter Storm 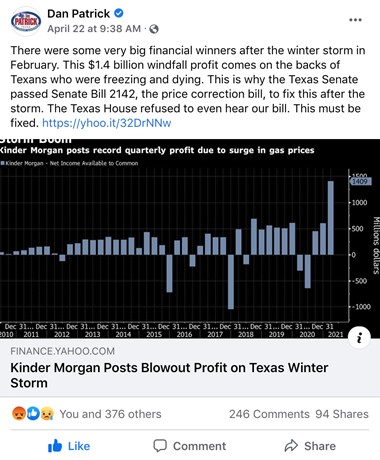 ICYMI: There were some very big financial winners after the winter storm in February. This $1.4 billion dollar windfall profit comes on the backs of freezing and dying Texans. This is why the Texas Senate passed SB 2142, the price correction bill, to fix this in February…but the Texas House refused to even hear our bill. This must be fixed.

Superintendents Stop by the Capitol 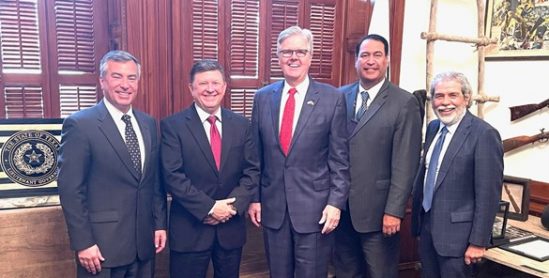 It was great to meet with superintendents from the Texas School Alliance, Brian Woods (San Antonio ISD), HD Chambers (Alief ISD), Roland Hernandez (Corpus Christi ISD), and Michael Hinojosa (Dallas ISD). Always a pleasure to have them in my office.

Please also continue to keep our state and our nation in your prayers.  Pray for our brave law enforcement officers who put their lives on the line for us and our communities every day.  May God bless you and your family, and may He continue to bless the greatest state of all—Texas.