Patrick: In Texas, school choice is necessary for change 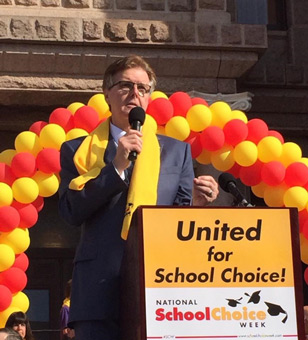 President John F. Kennedy once remarked that, “Change is the law of life. And those who look only to the past or present are certain to miss the future.” Change is difficult, and sometimes those who fear it the most will fight the hardest against it.

I have made education one of my top priorities since the day I was elected – both as a senator and as lieutenant governor. Throughout my time in office, my focus has always been on students and the most effective ways to change the system to meet the needs of students. I have been attacked repeatedly for these positions because, when you look out for students, frequently, the adults who have always controlled our educational system see it as an attack on them.

This is certainly true of my commitment to pass school choice in Texas, which would allow a parent to use the state funding set aside for their child to attend a private school, if they believe that is the best choice.

Texas is one of 20 states that does not have a school-choice program. With more than 5.2 million students in public schools, it is difficult to understand why so many continue to fight against school choice. These programs give parents and families an option to meet their child’s education needs when the public school is not able.

Students in failing campuses have few choices, if any at all. In Harris County, there are currently 62 campuses rated “Improvement Required,” our state’s lowest accountability rating. More than 48,000 students are enrolled in these failing campuses. Across the state, 467 campuses received a failing rating. In an effort to find a better school for their child, many families try to enroll their student in a charter school, but charter schools have long waitlists – currently an estimated 130,000 students across the state.

Special-education students are particularly vulnerable. I worked over two sessions to pass legislation to require cameras be placed upon request in the classrooms of special education students who are unable to communicate. Despite the repeated news reports of special needs students who had been abused and neglected, I was met with fierce opposition by school districts even though some school districts were unable to provide a safe environment for these students.

Educators continue to claim school choice takes money away from public schools, but that simply isn’t true. If it was, we shouldn’t let students leave their local school for any reason. No one thinks we should pass a law that says if the parents move to another state, their child must remain in the local school. My point is, there is no net loss to a school when a student leaves, no matter what the reason.

Across the nation, we have seen school-choice programs make a dramatic impact on the education system and the lives of students. Empirical studies overwhelmingly show positive academic student outcomes, including increased graduation rates, a reduction in crime and dropout rates, and high parental satisfaction.

A broad majority of Texans support school choice. Giving every child the opportunity to attend the school their parents believe is best for them is something the people of Texas elected me to do. I will continue to fight for change in our education system and push for school choice.

Patrick is the lieutenant governor of Texas. This article was originally published in the Houston Chronicle.