HOUSTON TX – Texas Lieutenant Governor and conservative Republican candidate for re-election, Dan Patrick, announced the release of a new radio ad and the expansion of this TV ad campaign:

“The principles and values that students learned in a one-room schoolhouse are still true today. That is why I passed a bill to ban the teaching of critical race theory and stop boys from playing in girls’ school sports. The keys to a good education are great teachers and involved parents. I will always fight for great teachers and for parents’ views to be heard and respected,” Patrick said. 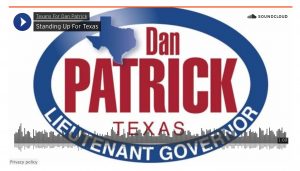 “Our TV ad campaign began last week in 15 markets and now expands to reach the state’s four largest markets: Austin, Dallas-Ft. Worth, Houston, and San Antonio,” said Allen Blakemore, senior political advisor to the Patrick campaign. “The TV ads can now be seen in every TV market in Texas.