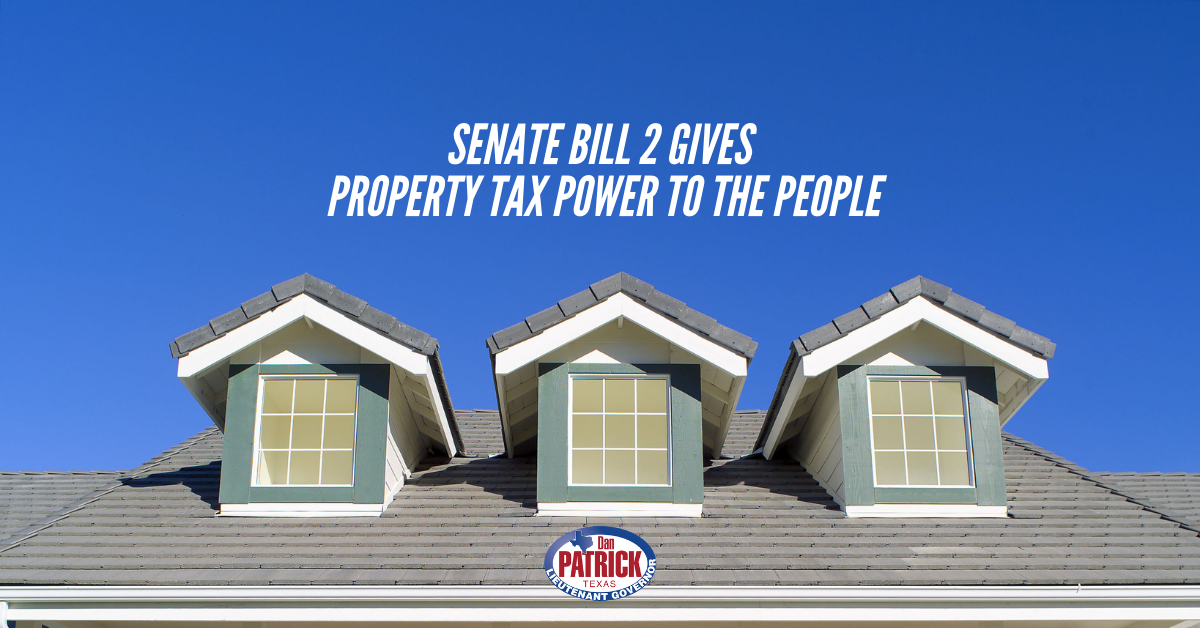 I have been fighting against skyrocketing property taxes since 2003 — even before I was an elected official — because property tax rates were driving people out of their homes. It was also clear to me that high property taxes had become the major threat to Texas businesses and our economy.

So, when Senate Bill 2 was passed and signed by Gov. Greg Abbott earlier this month, I could not be prouder. SB 2 will require cities and counties to go to the people for a vote before they can increase their revenue by more than 3.5 percent, plus any new local growth. To put it bluntly, SB 2 requires cities and counties to stay within their taxpayers’ ability to afford their local government.

If cities and counties believe they must have more funding for any reason, they can ask voters for an increase in the next regularly scheduled election. Before SB 2, every homeowner was at the mercy of their rising appraisals. Now, the power is in the taxpayers’ hands.

City and county officials were the only people opposed to SB 2, and they fought hard trying to defeat it. Failing that, some local governments have already begun misinformation campaigns telling local taxpayers that the state has “cut” local property taxes so they will need to lay off employees or stop local programs. This is not true. SB 2 does not cut anything — it simply requires that local cities and counties keep their annual revenue growth at 3.5 percent. That is a much higher increase than most people get in their paychecks every year.

SB 2 passed on a bipartisan vote in both the Texas Senate and the Texas House because lawmakers from all over the state — urban, suburban and rural — heard from their constituents that reducing property taxes was their top priority. The average property tax increase across Texas is estimated at about 7 percent a year, but in some areas it has been much higher. During the hearings on this issue, Texan after Texan came to Austin to tell us that high property taxes were forcing them out of their homes and destroying established communities.

Property tax increases on businesses were even higher. Gov. Abbott signed SB 2 at Wally’s Burgers in Austin, where the owner told us that his property taxes had increased a whopping 44 percent in the last year and 80 percent over the last decade. Small businesses cannot sustain that kind of increase. SB 2 will help ensure that businesses like Wally’s Burgers don’t close down, taking their jobs with them.

Some local officials are already looking for ways to maneuver around SB 2. There are proposals to get rid of the homestead exemption and threats to slap excessive fees on residents. Texas House Speaker Dennis Bonnen and I have jointly announced that we will eliminate any loopholes designed to circumvent the property tax reforms in SB 2 in the next legislative session. Taxpayers should also know that House Bill 3, the school finance reform bill, caps local school revenue at 2.5 percent. It also provides $5 billion for immediate property tax relief for home and business owners.

Keeping Texas communities strong and Texas businesses thriving is my top priority. That’s why skyrocketing property taxes had to be reined in and why cities and counties should begin learning to live with a 3.5 percent plus growth annual revenue increase.