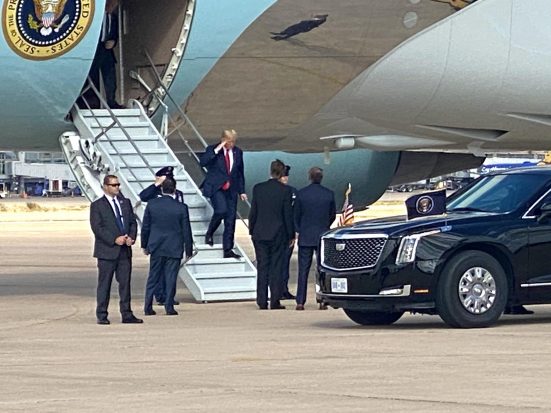 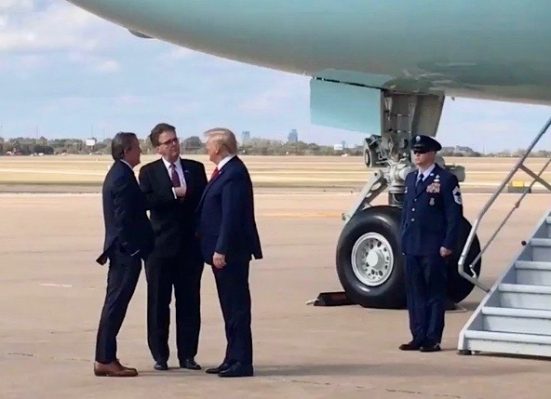 I greeted President Donald Trump and his daughter, presidential advisor Ivanka Trump, prior to their tour of the Apple manufacturing plant in Austin this week. The President graciously invited me to join him in the presidential limo for the ride to Apple.  This is not the first time he has extended that invitation, and I am always honored and humbled to get to spend personal time with him.  He is an energetic and engaged leader and a good friend to Texas.   It is always good to have him in the Lone Star State.

After watching hours of the phony impeachment hearings this past week, I was struck that so many of those who testified had never actually spoken with the President or spent any personal time with him. They literally do not know who they are talking about. These impeachment hearings are such a waste of time for our country.

Chick-fil-A Chickens Out to the Radical Left

During the 2019 Legislative Session, the Democrats killed a bill in the Texas House that would have protected religious liberty for business owners — prohibiting anyone from discriminating against a business because of the organizations they support. It was known as the Chick-fil-A bill after the City of San Antonio blocked a proposal to put Chick-fil-A in the San Antonio International Airport.  Some San Antonio leaders objected to Chick-fil-A because they contributed to the Salvation Army and the Fellowship of Christian Athletes, who they claimed did not back the LBGT political agenda.  The LGBT Caucus in the Texas House immediately and loudly proclaimed that they had killed the bill, celebrating a blow to our religious rights.

I immediately went into action in the Senate. With lightning speed, using the Senate rules, we passed the bill out of committee in less than 10 minutes.  It was quickly voted off the Senate floor and we sent it back to the House, where it passed the second time.  The Chick-fil-A bill was signed into law by the Governor.

The Chick-fil-A bill is not an attack on anyone. I believe every Texan has the right to live their life however they please.  We treasure liberty and freedom.  That’s why we must also fight for the religious rights of everyone. No one should be punished in business or in their personal life for their faith or for supporting institutions based in faith. That’s not just my opinion, it’s in the Constitution — the very First Amendment.

This week I was shocked to learn that Chick-fil-A caved to the anti-religious agenda of the LGBT political wing.  After we fought for the religious freedom of Chick-fil-A, they wouldn’t fight for themselves. They agreed not to give any more support to the Salvation Army or the Fellowship of Christian Athletes because some LGBT activists had proclaimed them to be politically incorrect.

Left-wing, anti-religion LGBT political activists will continue their war on religion, the Bible and the Word of God.  Their goal is to wipe out religion in America.  When a business can no longer support groups whose only mission is to help others and share the word of God without fear of retribution, then our constitutional right to freedom of religion is in great peril. What is even more chilling is that every Democrat candidate for President supports the anti-religion agenda of the left — that’s one more thing that is at stake in 2020.

Americans for Prosperity – An Award for Our Property Tax Reforms 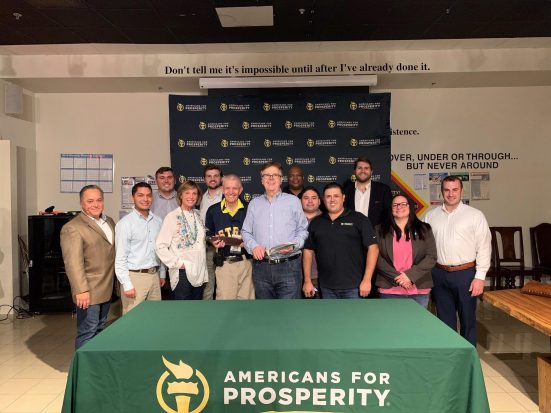 I am now a proud owner of a Jim Bowie knife. Americans for Prosperity (AFP) presented me with the knife as their Defender of the American Dream award for my leadership in passing Senate Bill 2 this session.  This legislation will require an automatic vote of the people if local entities increase revenue by 3.5%.  Schools can only increase revenue by 2.5%.  We also cut “Robin Hood” by half.

It was a special honor that I was joined by Jim “Mattress Mack” McIngvale, who also received an award and a Bowie knife.  Jim is a great Texan and a great American and deserving of more awards than we can ever bestow on him. 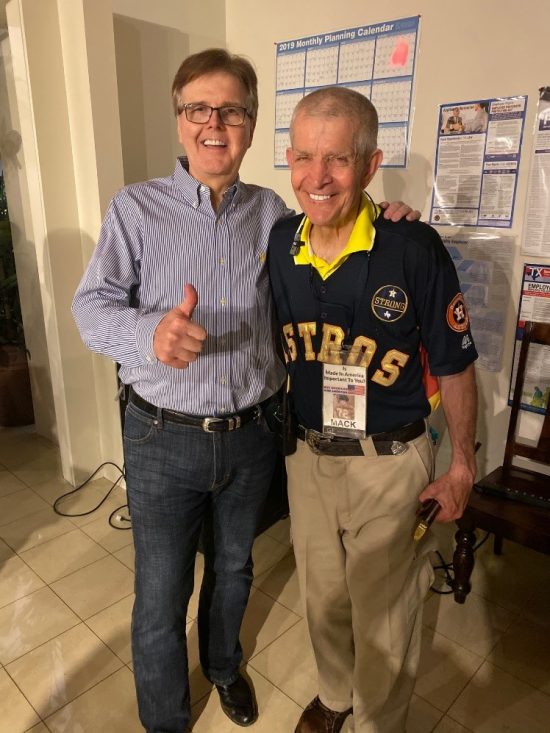 Texan Wins a Presidential Medal — Along with Jon Voight

President Trump awarded several National Arts & Humanities medals this week at a White House ceremony, including one to Texan Teresa (Terry) Lozano Long.  Terry grew up in Premont in South Texas and went on to receive a PhD from the University of Texas.  She and her husband Joe have made great contributions to the arts and to education, and this presidential award is well-deserved.  Every Texan is proud.  Here is a video of the ceremony. 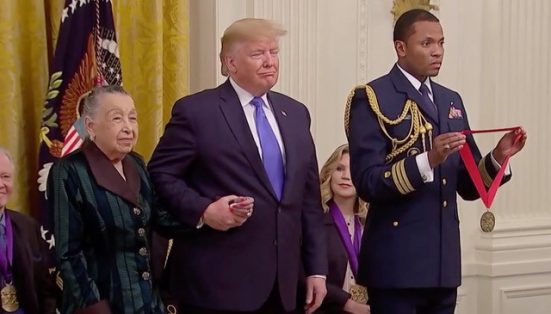 Another recipient was actor Jon Voight.  During the 2016 presidential campaign, Jon Voight reached out to me.  It was a great shock to get a call out of the blue from one of my favorite actors. I had not met Jon before, but he knew I was Chairman of the Texas Trump campaign and he wanted to know how he could help — he wanted to meet people on the ground in Texas.  He was an enormously gracious guy. He did help, and I am very grateful.

When Hollywood actors like Voight and two other strong conservative friends of mine, Chuck Norris and Lee Majors, both of whom live in Texas, step up in support of the President, you know they are putting a lot on the line.  We all appreciate it.  Congratulations to Jon Voight for this prestigious award.  You can view the President’s presentation to Jon here.

In Case You Missed It

Kanye West and his choir brought light to those who needed it during his surprise worship service at two Harris County jails in Houston last Sunday.  An atheist group has complained that the performance was an “egregious” violation of the U.S. Constitution — but Jesus prevailed.  Some great footage in this clip from Fox News.

Happy Thanksgiving – So Many Blessings

As you know, God gave me a wake up call on my heart this year, and I am grateful that I was able to get that taken care of, and that I can now work to help urge other Texans to take care of their heart and pay attention to the warning signs. 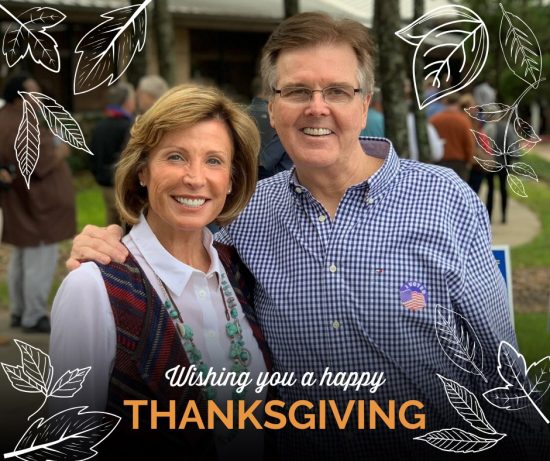 Finally, I am thankful for you and your support in electing me Lt. Governor.  It is a great blessing to serve. And thank you for all that you do. Jan and I wish you and your family a very blessed Thanksgiving.  God bless you and God bless Texas.

P.S. As I mentioned in last week’s email, many years ago, I designed a lapel pin to symbolize my faith, and my love for the state and country. Now, with a donation of $10 or more, you can secure an official lapel pin to call your own. Click here to get yours today.

P.P.S. Feel free to forward this email to your friends and family who may not be on our email list — they can also click here to sign up for future updates.