🚨 I have an announcement… 🚨 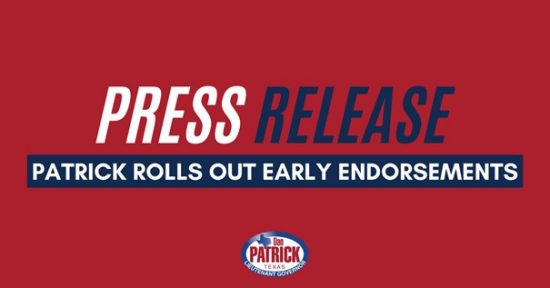 September brings Texans the start of hunting season, college football and campaign season. I’m proud to kick things off with four tremendous endorsements from four friends, each of whom I truly admire.

President Donald Trump said:
“Lieutenant Governor Dan Patrick is a great fighter for the people of Texas. He has stood up for Life, Liberty, the Second Amendment, Border Security, our Military and our Vets, and our God-given Freedoms. He has governed by conservative principles of LOW TAXES and careful spending, always doing what is best for his great State and for America. Texans should re-elect him! He is outstanding and has my Complete and Total Endorsement!”

Senator Ted Cruz said:
“Dan Patrick is a fearless conservative leader who is leading the fight to protect life, liberty, and our Second Amendment rights in Texas. He has stood up against the angry left-wing who want to destroy Texas and has championed low taxes and reasonable regulations that have helped Texas come back stronger than ever and will ensure that the Lone Star State continues to be a dominant force in the global economy. I am proud to stand with Dan and enthusiastically support his re-election. I look forward to continuing to work alongside Dan for the people of Texas.”

Former Governor Rick Perry said:
“Dan Patrick is a warrior for the people of Texas, a fearless champion of Texas values and liberties whether it is securing the border, protecting our Second Amendment rights or doing what it takes to keep taxes low and make sure that Texas businesses continue to prosper. I am proud to endorse his re-election.”

Senator John Cornyn said:
“Dan Patrick’s leadership of the Texas Senate is a major reason our state remains the best place in the country to live, work, raise a family and start or grow a business. I have worked closely with Dan on a wide range of issues over the years from Hurricane Harvey to fighting federal government overreach to protecting our constitutional rights. Dan says what he means and means what he says – you always know where he stands and he delivers for Texans. I look forward to continuing to work with him and I urge every Texan to join me in voting to re-elect him as our Lt. Governor.”

I am grateful for the support from these Republican leaders. I am extremely proud of all we have accomplished since I have been the Lt. Governor of Texas. This year alone, the Texas Senate has passed landmark legislation, setting the foundation for conservative, common-sense policy. We passed numerous pieces of legislation that affirm our Texas values of life, liberty, freedom and the Second Amendment, including historic election integrity reform, education reforms, property tax relief, and securing the border.

With your help, we will continue to fight against destructive liberal Democrat policies that attempt to undermine the values and beliefs of hardworking, law-abiding Texans. 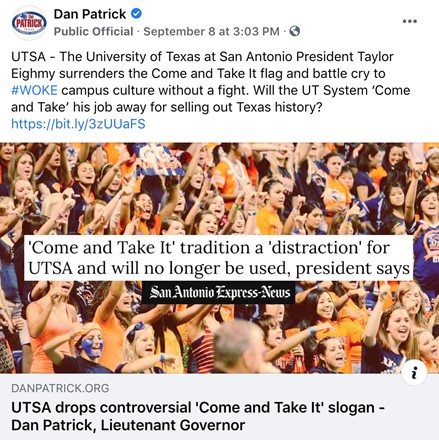 Did you see this? UTSA President Taylor Eighmy surrendered the ‘Come and Take It’ flag and battle cry to WOKE campus culture without a fight. Will the UT System ‘Come and Take’ his job away for selling out Texas history? 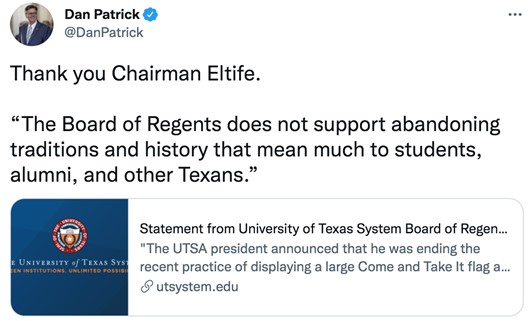 I want to thank Chairman Eltife for speaking out against this outrageous decision. 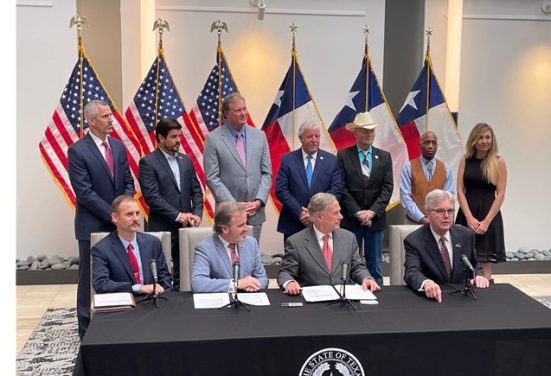 Maintaining the integrity of Texas’ elections has been a top priority of mine since I was elected to the Texas Senate and throughout my tenure as Lt. Governor. Our goal was to make it easier to vote and harder to cheat, and this bill does just that.

I will not stop looking for ways to make our elections more secure, because even a single fraudulent vote is one too many. 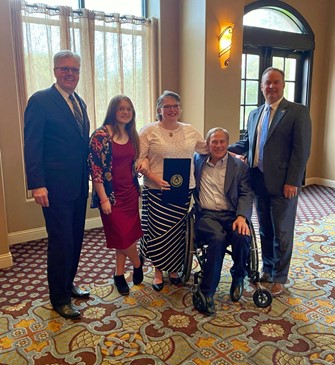 Here with Trooper Damon Allen’s family, Gov. Greg Abbott, and Rep. Reggie Smith.
Trooper Allen was killed by a dangerous criminal who should never have been on the street.

I joined Gov. Abbott yesterday in Houston as he signed Senate Bill 6, the Damon Allen Act, into law. This bill prohibits violent offenders or repeat offenders from being released on personal bonds, and mandates judges to consider the offender’s criminal history before setting bail. Too many Democrat Judges are releasing criminals back on the streets to commit more crimes.

I will always remain committed to supporting legislation that will keep Texans safe and keep violent criminals off the streets. Senator Huffman, who steered the bill through the process and passed it, was unable to attend due to a flight weather delay.

I sat down with an old friend, KPRC’s Khambrel Marshall to talk about the special session. In case you missed it, click here to watch.

I also joined Raymond Arroyo to speak about Texas’ latest pro-life victory, the Heartbeat Bill. You can watch the interview here.