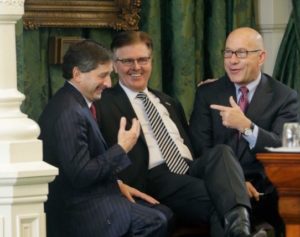 AUSTIN – An hour after the last gavel had fallen in the Texas Legislature’s 84th session, Lt. Gov. Dan Patrick sat in his office, eating a slice of lemon pie and drinking lemonade. It was a gift, he said, from a senator who thought the session would be tough, but ended up pleased with the outcome.

The tail of his blue dress shirt out over his navy slacks, and uncharacteristically without a necktie, Patrick, 65, was at ease.

He pointed to a black fedora hanging on a rack in the corner. The hat, a gift from his son and daughter when he came to the Senate in 2007, was a nod to the 1939 classic “Mr. Smith Goes to Washington.” The movie is one of Patrick’s favorites, so much so that he had his entire staff watch it when he became a senator.

He envisions himself as a Jeff Smith, the title character played by Jimmy Stewart, the outsider who goes to Congress and changes the government.

Now in Texas’ No. 2 political post, and having just completed his first legislative session as a leader in the government he once criticized, Patrick insisted he has not changed. He still is the same person whom Texas Monthly magazine once forewarned about – “Here Comes Trouble” – when he first arrived in the Senate, a slam Patrick has worn as a badge of honor ever since.

“My principles are still the same, and my values are still the same,” he said, adding that the issues he campaigned on – providing property tax relief, repealing the two-thirds rule to keep a few senators from blocking debate on bills supported by the majority, opposing abortion rights and increasing border security – all were addressed during the just-completed session.

“I haven’t changed, but I’ve learned how to, hopefully, be more effective,” he said. “If you don’t learn every session … you’re not progressive.”

Perhaps the most-watched and volatile player in the Legislature, Patrick got high marks for a smooth performance from senators, even Democrats who loathe much of the conservative legislation he pushed through. Despite a palpable tension between Patrick’s Senate and Speaker Joe Straus’ House, rooted in Patrick’s perceived antipathy toward the lower chamber as much as in actual philosophical differences on major issues, the session generally ended without the political explosions and rancor predicted at its start.

If Patrick came to Austin as a Jeff Smith eight years ago, he saw himself in a different role this session.

“The president of the Senate … he’s sitting there with the gavel,” Patrick explains. “At one point, they try to stop Jeff Smith. And (the presiding officer) said, ‘Go on senator.’ … He’s sitting there admiring Mr. Smith, kind of like ‘I want to give this guy a shot.’

“There were many times this session when I sat up there exactly in that pose, listening intently to members debate the issues and I thought: How did I get from the guy in the hat in 2007 to the guy up here with the gavel?”

The answer, senators and political observers agree, is that the onetime Houston radio talk show host has moderated an in-your-face approach to get things done in Austin, a change he likens to Jimmy Stewart standing up against the Washington political establishment while remaining true to his principles.

Senators on both sides of the political aisle say Patrick has learned how to work within the system, even as his self-confident bravado still grates on some. Instead of organizing and managing ideological political coalitions from the outside, Patrick and other conservative Republicans this legislative session had to show they could govern, they say.

“He told us to think bold and we did,” said Sen. Kevin Eltife, R-Tyler, a critic of some legislation that Patrick pushed, but who at the end of the session praised the lieutenant governor’s handling of the Senate’s process. “We all stood our ground on various issues, but he let us do our work. Lt. Gov. Patrick did a great job in presiding over the Senate.”

“Like a lot of other people, I was anxious about the new leadership when the session started,” said Sen. John Whitmire, D-Houston, who has spent 32 years in the Senate. “I think he did the best job of anyone I’ve seen, even though I don’t agree with him on all the issues. I think we benefited from having a former senator in the chair.”

As one of only two Democrats to get coveted committee chairmanships under Patrick, Whitmire said he got significant criminal justice reforms enacted, including changes to the system of selecting grand jurors, an overhaul of the state’s troubled sex-offender agency, decriminalization of truancy and a greater focus on treatment of juvenile offenders in community programs – perhaps more so than he would have previously.

“We got a lot done this session, in a lot of areas,” Whitmire said. “I joke with him that if I’d have known he was going to be lieutenant governor, I’ve have treated him better in 2007.”

“Instead of being a rabble-rouser anymore, he can harness and direct those coalitions to accomplish things,” said Brandon Rottinghaus, a University of Houston political science professor who has followed Patrick’s rise to power. “This looks a lot like the way Bill Hobby and Bob Bullock managed the Senate, managing the ideological coalitions on both sides. Bill Hobby used to say that if you had both sides mad at you at the end of a session, you’d had a good session.”

The only people not satisfied with Patrick’s work may be the tea party activists who worked to get him elected. In mid-May, members of Patrick’s own grass-roots task force blasted him, Gov. Greg Abbott and the House for not passing measures to outlaw sanctuary cities, strengthen the current ban on same-sex marriage and approve school choice, among other issues.

The discontent continued last week in letter grades: The Senate got a C, the House an F.

“If they look at the list of campaign promises, it would be tough to argue that we (the Senate) haven’t checked all the boxes,” he said. “Did we get 100 percent done? No. Did we get more than 90 percent done? … We got all the major items to the governor’s desk.”
Patrick, who pointedly told reporters last week that he never plans to run for governor, said he will begin focusing on issues for the next legislative session in two years.

“I’m not done with property tax relief,” he said.