A great week for conservative victories!  On Wednesday, Governor Greg Abbott signed Senate Bill 8, the Heartbeat Bill, landmark pro-life legislation that will save thousands of lives.  Yesterday afternoon, a full agreement was reached on HB 1927, Constitutional Carry – a historic Second Amendment victory.  Early this morning, the Texas Senate passed House Bill 3929, which will ban the teaching of critical race theory in our schools – another big win for conservatives.  Here’s the details: 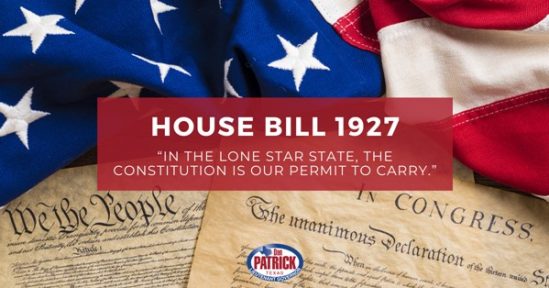 I am thrilled to announce that a full agreement has been reached on Constitutional Carry – HB 1927.  This legislation restores our Second Amendment rights and upholds every Texan’s right to self-defense. HB 1927 is a historic bill and a national model. It includes the thinking of national gun rights advocates and many in Texas law enforcement and affirms our commitment to protect the rights of gun owners and the safety of those in law enforcement.

As you know if you are on social media, there were those who said HB 1927 was “blocked” in the Senate.  They perpetuated stories of a ‘poison pill’ and other conspiracies, willfully misleading Second Amendment supporters across the state.  They also didn’t believe my commitment to the Second Amendment and how hard members of the House and Senate were working to pass this bill.

Some say that those who were pushing lies and misinformation about the Constitutional Carry bill were doing it for personal political gain. They didn’t care if the bill passed and perhaps were even hoping it would die.

I want to congratulate Rep. Matt Schaefer, R-Tyler, and Sen. Charles Schwertner, R-Georgetown, for getting HB 1927 across the finish line, and I look forward to celebrating with them when this bill is finally passed next week. Here’s a photo (below) we took in my office after Schaefer and Schwertner shook hands on the deal.  They are holding 1830’s era pistols from my Alamo collection.  They had Constitutional Carry back then in Texas – and we have it now.   Click here to read my official statement. 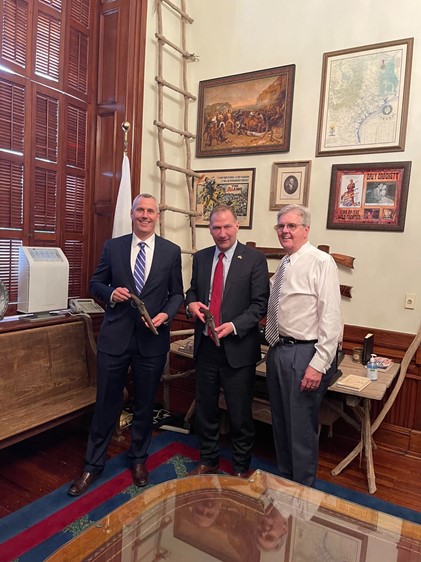 If a heartbeat is detected, a life must be protected 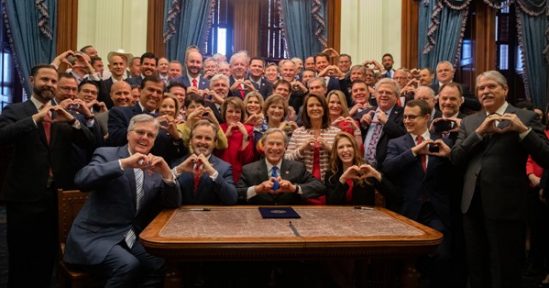 Since I have been Lt. Governor, the Texas Senate has passed the strongest pro-life legislation in history, and this past week we took another giant step forward in our battle to protect the unborn. Senate Bill 8, the Heartbeat Bill, has been signed into law.  SB 8 makes it illegal for an abortion to be performed after a child’s heartbeat is detected in the womb. This bill is uniquely crafted to allow any Texan to sue an abortion provider — a strategy we think will be successful in reducing abortions.  This important lifesaving legislation reflects Texas’ pro-life beliefs and our continued commitment to protecting the most vulnerable.

No CRT in Texas Schools

Early this morning, the Texas Senate passed the Critical Race Theory Ban, House Bill 3929.  Unfortunately, the left is pushing an ugly and divisive idea that one race is better than another and that someone, by virtue of their race or sex, is innately racist, sexist or oppressive. These ideas have made their way into some Texas public school classrooms.  We are even seeing these lies in books for elementary school children.  It has to stop.

HB 3979 will make sure this misinformation, including the myth that America was founded in 1619, does not show up in our school curriculums statewide. When we send our children to school, we do not want them indoctrinated by evil and divisive ideas. We want them to judge everyone by the content of their character, not the color of their skin.  Here is my official statement.

A Note from President Trump 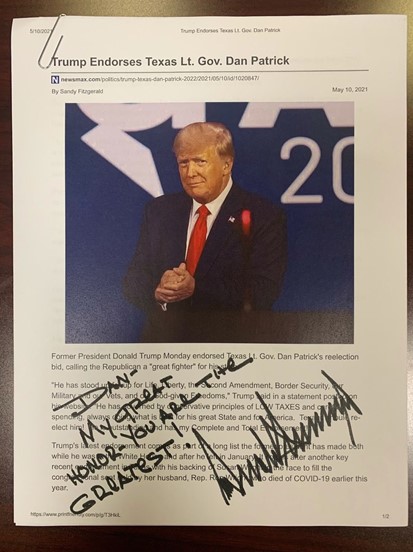 I want to share this handwritten note I got from President Trump after he endorsed me for re-election last week.  It is an honor to have President Trump’s endorsement and support.

Two of my grandsons — Weston and Shepherd  — joined me on the Senate Floor this past week.  When we have children who are guests in the Senate Chamber, we often allow them to use the gavel.  Kids love “whamming the whammer” and Weston and Shepherd were no exception.  Here’s a short video of Weston gaveling in a bill. I hope it brings a smile to your face!