Frankly, I was shocked by their failure to respond

Today I called for the resignations of Public Utility Commission (PUC) Chairman DeAnn Walker and Electric Reliability Council of Texas (ERCOT) President and CEO Bill Magness. Walker resigned shortly after I made my request.

Immediately following the storm, I pledged to the people of Texas that I would get to the bottom of the crippling power outages that began on February 15, leading to tragic loss of life and billions in damages to homes and infrastructure across the state.

ERCOT’s job is to manage our electricity grid and the PUC oversees ERCOT. Last week, the Senate Business and Commerce Committee began our investigation to determine the cause of the power outages during the winter storm. During the combined 9 hours that the PUC Chair and the ERCOT CEO testified, it became very clear that they had failed to plan for the worst-case scenario and did not let state leaders and everyday Texans know that we were facing a life threatening storm.  They also offered few ideas about what could have been done differently and what needs to be done going forward to prevent a similar problem in the future. Frankly, I was shocked by their failure to respond. Click here to read my official statement.

Update on the Alamo

As we prepare for Texas Independence Day tomorrow, there is some good news from San Antonio that I want to share.  San Antonio Mayor Ron Nirenberg announced today that he has removed Councilman Roberto Trevino from the Alamo Management Committee and the Alamo Citizens Advisory Committee.  You may remember that Roberto Trevino is the guy who led the charge to move the Alamo Cenotaph and has repeatedly called the story of the battle of the Alamo a “myth.”

To quote Trevino directly, he said that the history we will celebrate tomorrow is “wrong, it’s bunk.  San Antonians don’t want to tell that . It perpetuates a lie.”

Trevino served as chairman of the Alamo Management Committee and since we blocked them from moving the Cenotaph at the September meeting of the Texas Historical Commission, he has been looking for ways to sabotage plans to expand and restore the Alamo church and battlefield.

I had a productive meeting with Texas Land Commissioner George P. Bush last month.  The Texas General Land Office currently manages the Alamo and he agrees that the issue of the Cenotaph has been resolved.  The historic monument will not be moved.  He also agrees that the focus of the Alamo restoration must be the story of the 1836 Battle of the Alamo.  I believe that we should develop a bold plan to make the Alamo one of the best historic sites in the country.  There is so much history surrounding the Alamo, there is no reason why San Antonio cannot develop an entire historic district surrounding the area – similar to the Freedom Trail in Boston – to tell the complete story of the battle and Texas independence.

I will continue to work with the General Land Office, the Texas Historical Commission, the Legislature, the City of San Antonio and others to make sure that the historic site that is built honors the memories of Bowie, Crockett, Travis and all who died there.

Here is a photo of Mayor Nirenberg and Councilman Trevino.  Notice the sign in the background of the shot! If you’d like to read the story about the San Antonio Mayor’s move today, click here. 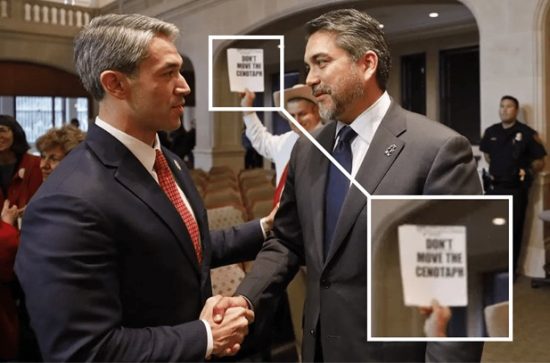 Please continue to keep our state and our nation in your prayers. Pray for the families who lost loved ones in the winter storm and are still digging out from the damage.  Continue to pray for those who are suffering from coronavirus and for our heroic health care workers. Finally, as always, keep our brave law enforcement officers in your prayers. May God bless you and your family, and may He continue to bless the greatest state of all—Texas.