The response to last week’s long email on the Legislative Session was extremely positive. Readers agreed that conservatives must unite to win in 2020 — and that we have a lot of work to do to ensure that we Keep Texas Red. Texas must continue to lead the nation in protecting, life, liberty, freedom and the Constitution. There were a couple of follow-up questions from the email that I’ve been asked to clarify and I’m happy to do so.

When I laid out the rate of growth for the state budget, I noted that our friends at the Texas Public Policy Foundation, the best conservative think tank in the country, had first reported a higher rate of budget growth — 12.4% —immediately after the Legislative Session in June.  Later in the summer, they revised their growth estimate to 8.5% (4.25% a year) after adjusting funds that were allocated for property tax relief, Hurricane Harvey funding and an LBB staff revision to the budget.

This growth percentage is a little different than the percentage Governor Abbott and I reported on our LBB Fiscal Year-End Update Statement in September. I stand by our numbers. We simply use a different model than TPPF. They calculate the rate of budget growth by comparing the amount of dollars appropriated in a two-year budget cycle to the dollars appropriated in the next two-year cycle.

I believe it is important to calculate budget growth based on what is actually spent from one budget cycle to another, so we use a budget analysis based on how much we actually spent over the last budget passed and the new budget passed. That’s the way many businesses do it. The over-all goal is the same — to ensure that state budget growth is no higher than the rate of the increase in population — a critical factor in Texas — times the rate of inflation.

Both methods are valid, just different. The bottom line is both are calculated to ensure that we keep a tight rein on state budget growth.

Ross Ramsey, a writer at the increasingly left-wing Texas Tribune (which recently entered into a partnership with a New York based, George Soros backed publication) weighed in on my email to supporters last week. He argues that the $19 billion in federal natural disaster funding and the $5 billion in property tax relief we returned to taxpayers should be counted in the budget as new spending, even though we would not have received that federal money if there was no hurricane.

It is not clear whether Ramsey thinks we should have turned the money down — leaving Texans who lost their homes without help — or whether he just was looking at another opportunity to slam conservatives.  Again, I stand by the budget analysis that Governor Abbott and I put out, as well as the similar analysis by TPPF.  The idea that federal disaster money should be counted as a budget increase is absurd. For the record, Senate Bill 2 — the local property tax relief bill — specifically exempts disaster funding from being counted as an increase in city and county budgets as well.

One Final Follow-Up: About that Special Session

When I stated in last week’s email that it would not be appropriate for me to publicly ask Governor Abbott to convene a Special Session — since that is solely his prerogative — a few people noted that in 2017, I did force a special session. Here’s the difference: Although I do not have the authority to call a special session, when the Legislature is in regular session, I do have the power to withhold the budget or a “must pass” bill, in order to force a special session. That’s what I did in 2017.

Why did I do that? Because former Speaker Joe Straus was killing important conservative legislation during the regular session that I and other conservatives wanted to pass. He didn’t think I’d dare kill a “must pass” bill dealing with licensing doctors. He figured wrong. We passed much of what he killed in the regular session during the special session, including a record number of pro-life bills.

Kanye in Texas – A Message of Faith

I had a chance to hear Kanye West talk about his faith at Lakewood Church earlier today and to meet him and his wife, Kim Kardashian. Kanye has turned his life over to Christ and his message of faith is reaching young people across the country and bringing them to God. Kanye wore my Texas, American Flag and cross pin that I designed many years ago.  He gave a compelling message about how he committed his life to Christ after being lost for so many years.

They invited me to join them for the service, and then to meet afterward to discuss the prison seminary program in Texas that I started several years ago with Senator John Whitmire from Houston.

In case you don’t know about our prison seminary program for inmates, all of the participants are serving long sentences. The purpose of the program is to create an army of pastors in our prisons for the long term.  Each inmate must complete the same four-year degree program as any person would on the outside who is seeking to become a pastor.  The results have been remarkable.  Just look at the numbers:

This is the largest program of its kind in the world and only the second in the nation.  It is all done with private funds, no taxpayer dollars, and it’s one of the things I am most proud of accomplishing during my time in public office.  To find more information, or if you would like to support this program, go to the  Heart of Texas Foundation.

I believe the Lord brings people together for a reason and sharing the work of this prison program with Kanye and Kim — who hadn’t heard about it until recently — clearly has God’s hand on it.  Kanye has also visited with President Trump to talk about these issues. 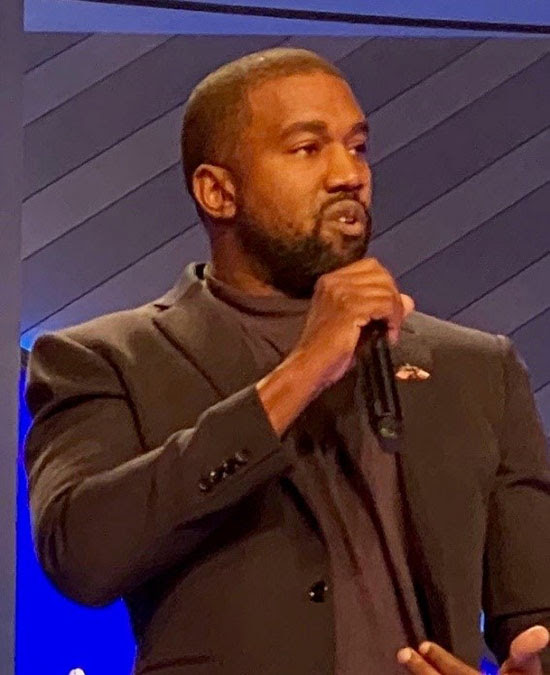 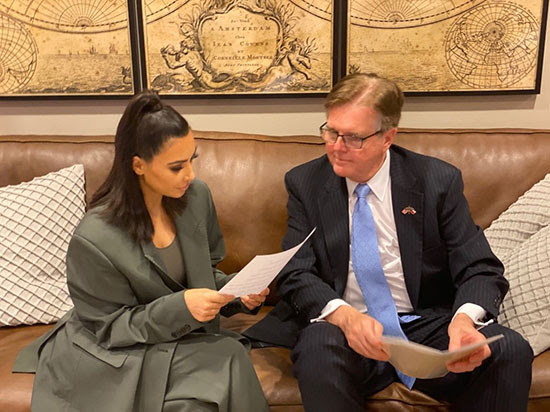 Nationally syndicated talk show host Dennis Prager delivered the keynote address at the 2019 Texas Faith, Family, and Freedom Gala Friday night.  Dennis provided a thoughtful and astute analysis on just about everything — from the war on faith and family to today’s divisive politics. I also had the opportunity to address the huge crowd in Houston for this event — a record breaking attendance for Texas Values.  I saw many old friends and met several new ones. 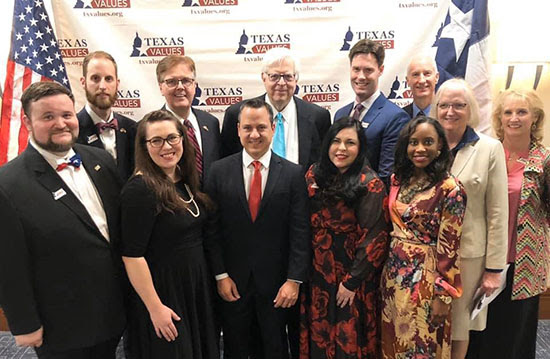 I was honored to spend this Veterans Day with a number of Wounded Warriors gathered for an annual hunting trip organized in their honor near Fredericksburg. Governor Abbott, Senator Cornyn and State Senator Buckingham also attended. We are so thankful for the service and sacrifice of these men and women and all our veterans.  They are a daily reminder that America is the home of the free because of the brave. 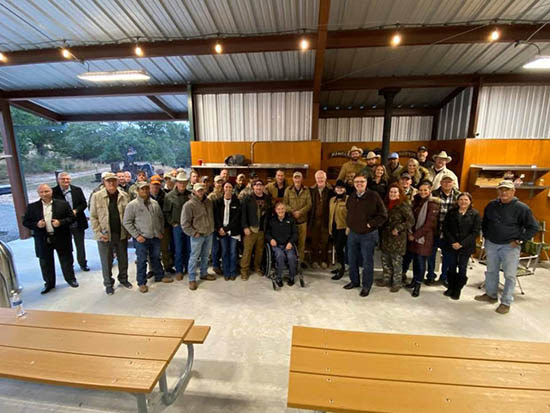 I am a big fan of the “Texas Bucket List” TV Show and I ran into the show’s host, Shane McAuliffe, at Gaido’s restaurant in Galveston this week.  He has great tips on good places to eat and see all over our wonderful state. 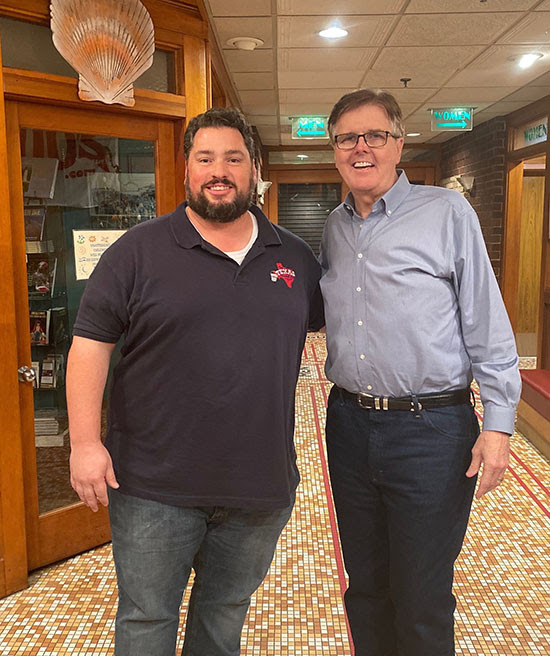 I also visited the Bryan Museum while in Galveston, home to one of the world’s largest collections of historical artifacts, documents, and artwork related to the American West. They have the largest diorama of the Battle of San Jacinto in the world!  Every Texan should put it on their bucket list! 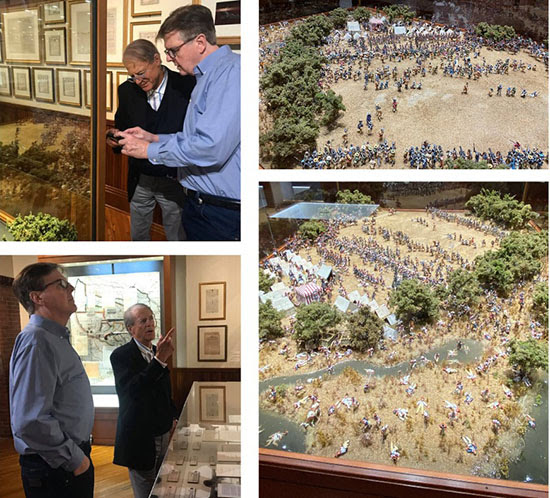