I’m not usually a New York Times reader, but you may want to check this out. 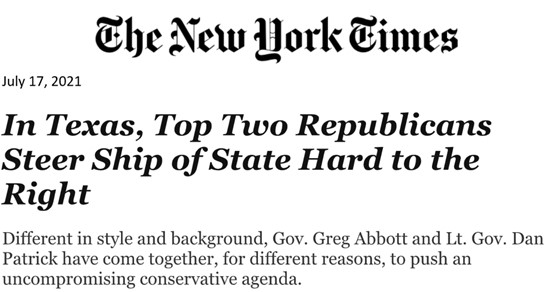 In just one week, the Texas Senate passed the entire list of legislative bills Gov. Greg Abbott put on the special session call.  It is amazing what can be accomplished when you show up for work and do what the people of Texas elected you to do.

Although the Texas House Democrats busted their quorum when they fled to Washington, D.C., we still had a quorum in the Texas Senate to pass this key legislation.

Texas Democrats say they are in Washington trying to get Congress to pass HR 1, the federal election bill that will federalize elections and override state laws in Texas and everywhere else.  It’s one more way Democrats are trying to take away our freedom.  Texans don’t want to federalize our elections.  A recent poll by the Texas Association of Business found that 65% of Texans do not believe election law should be federalized and do not want the U.S. Congress to dictate Texas election law.

Here are the bills the Texas Senate passed last week:

If the House Democrats do not return from Washington, D.C., we will continue to pass these bills over and over again until the House finally has a quorum.

About that Quorum – Support a Simple Majority

One reason that Democrats are able to break the quorum in Texas so easily simply by walking out is that Texas requires that two-thirds of all lawmakers be present in order to conduct business – that is a very high bar.  Most states only require a simple majority.  Last week, I asked Governor Abbott to add changing the quorum to a simple majority to his next special session call.  It will require an amendment to the Texas Constitution, but I am confident Texas voters will support making the change – particularly after this latest quorum busting stunt by the Democrats. 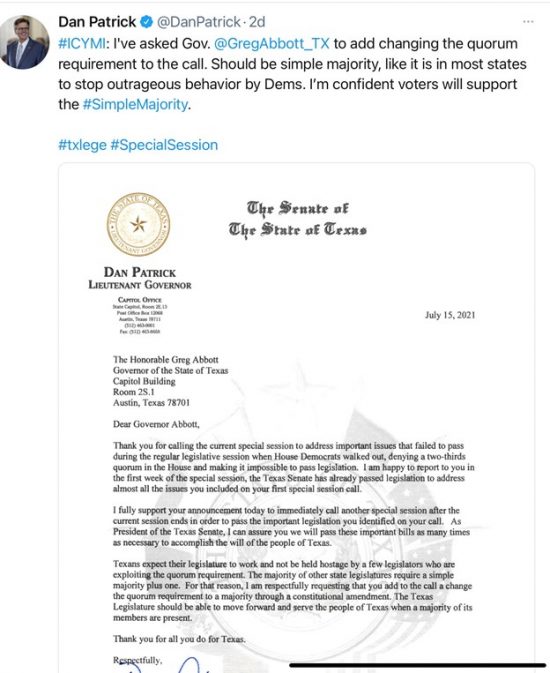 I was excited to join Senator Bryan Hughes, R-Mineola, at the Texas Federation of Republican Women’s Regional Meeting on Friday in Georgetown. These ARE the women who help keep Texas Red. In the photo below, you will notice TFRW President Glynis Chester on my left and VP Robbi Hall are wearing “Thrown Under the Bus Club” shirts. Why? Because they have been outrageously and unfairly attacked by a writer and surprisingly by a member of the Texas House who charged that they were a  liberal group. That’s outrageous and of course it is untrue.

Texas Republicans are an overwhelmingly conservative party and TFRW has played a major role in electing conservatives in election after election.  The House member owes them an apology and the writer is just flat wrong.

I am honored to stand with TFRW.  I believe every Republican in office in Texas today should be. 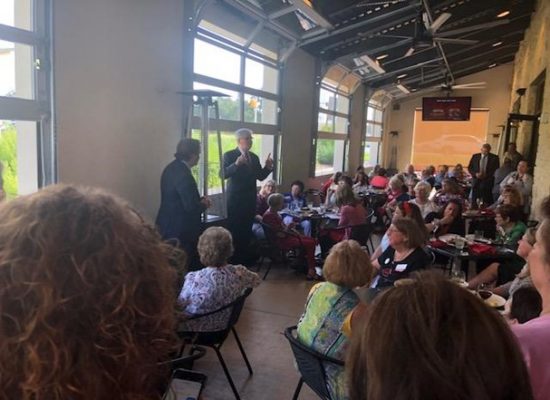 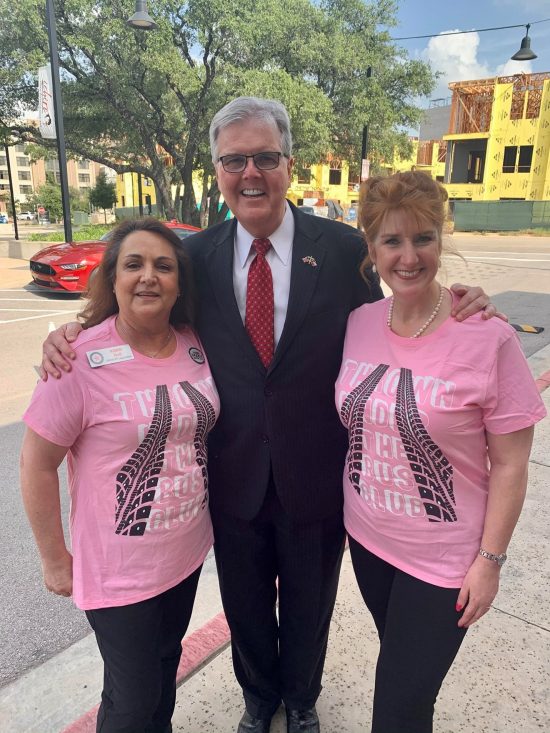