At this point, the Senate has passed 27 of my 30 top priorities including legislation to strengthen our commitment to protecting life, the Second Amendment and a lean conservative government. E-Verify, Voter ID and School Choice also passed the Texas Senate this week. Information about the latest priority bills passed by the Senate is listed below. As you can see, all this legislation is rooted in the conservative principles you elected me to uphold.
Senate Budget Does Not Raise Taxes or Use the Rainy Day Fund!
I am particularly proud to let you know that the Senate passed CSSB 1 – the 2018-2019 budget – for the State of Texas. The budget is a half billion dollars less than our last budget and does not raise taxes. It also does not use the Rainy Day Fund (the state’s savings account) for ongoing expenses.
Here are some other budget highlights:
The Senate also passed Senate Bill 9, the state spending cap.  Sponsored by Senator Kelly Hancock, R – North Richland Hills, the spending cap will help ensure that the state of Texas continues to live within our means.
School Choice Passes the Senate!
Senate Bill 3 – the School Choice bill by Senator Larry Taylor, R – Friendswood, passed in the Senate on Thursday. Senate Bill 3 includes both Education Savings Accounts and a Tax Credit Scholarships program. I issued a statement with details about this legislation when this bill was passed. You can read it here:  Click here to read my full statement on the passage of Senate Bill 3.
Senator Taylor also sponsored another important education bill, Senate Bill 22 – P-TECH (Pathways in Technology Early College High School) which will target workforce-ready partnerships between school districts, higher education institutions and business employers, we will continue to improve our workforce and prepare students to be successful in today’s competitive and rapidly changing economy.
We Must Always Protect Life
Senate Bill 20 – Pro-Life Insurance Act by Senator Larry Taylor, R – Friendswood, passed in the Senate on Monday. Senate Bill 20 is an important step in ensuring that Texans are never forced to violate their conscience by paying for someone else’s decision to end an innocent life.
Protecting the Integrity of Our Elections
Voter ID – Senate Bill 5
Nothing is more critical to our democracy than the integrity of the voting process. Senate Bill 5 – Voter ID by Senator Joan Huffman, R – Houston, passed in the Senate on Tuesday. Watch and share my statement below to learn more. 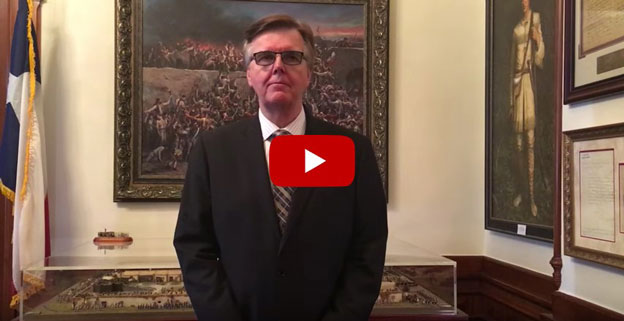 Protecting the Second Amendment
License to Carry Fee Reform – Senate Bill 16
Senate Bill 16 – by Senator Robert Nichols, R – Jacksonville, passed in the Senate on Monday. Senate Bill 16 will make lawful carry more affordable for law abiding citizens across the state. No Texan should be deprived of their right to self-protection because of onerous licensing fees imposed by the state.
Other Priority Legislation
Union Dues – Senate Bill 13
It is clearly not the role of government to collect union dues, and certainly not at taxpayer expense. Senate Bill 13 – Union Dues by Senator Joan Huffman, R – Houston, passed in the Senate on Thursday. This legislation places government in its appropriate neutral position and lets unions collect their own membership dues.
E-Verify – Senate Bill 23
Senate Bill 23 – E-Verify by Dr. Charles Schwertner, R – Georgetown, also passed in the Senate on Tuesday. Senate Bill 23 will codify and strengthen current E-Verify efforts. Watch below for my full statement on the passage of Senate Bill 23.
Help for Texas Heroes – Senate Bill 27
Our veterans deserve the very best care that we can offer. The Help for Texas Heroes Act by Senator Dr. Donna Campbell (R – New Braunfels) passed in the Senate last week. Senate Bill 27 helps provide that by building on the success of the Military Veteran Peer Network.
Texas Ports – Senate Bill 28
In order for Texas to remain the number one exporting state we must continue to enhance connectivity to ports and invest in port infrastructure. SB 28 will accomplish this goal by providing critical funding opportunities that ensure our ports remain competitive. I commend Senator Brandon Creighton, R – Conroe, on the passage of Senate Bill 28.
Senate Bill 30 – Educate and Inform – The Community Safety Act by Senator Royce West, D – Dallas, and Senator John Whitmire, D – Houston, passed in the Senate on Wednesday. This bill will direct the State Board of Education and the Texas Commission on Law Enforcement to work with local school districts to educate and inform both students and law enforcement officers on proper interaction. Senate Bill 30 is designed to help young Texans and members of law enforcement interact and build trust in communities across the state.
I commend the Texas Senate for their hard work this week. They have done a great service for the people of Texas and are committed to upholding Texas values. Thank you for your support.