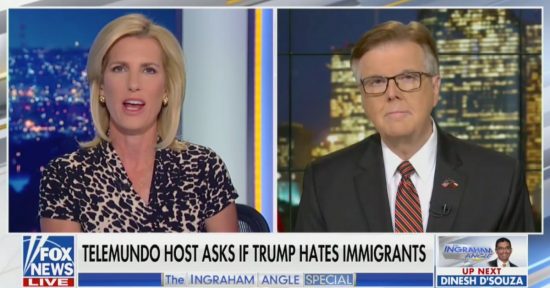 I was on Fox News with Laura Ingraham this Friday talking about the border crisis and our announcement that Texas will send additional national guard troops. In case you missed the show, click here to watch.

I joined Governor Greg Abbott,  Speaker Dennis Bonnen and Major General Tracy R. Norris on Friday to announce the deployment of an additional 1,000 Texas National Guard troops to assist the Department of Homeland Security (DHS) and Customs and Border Patrol (CBP) with the escalating crisis at the southern border.

Congress has Failed to Act on the Border

In May alone, 144, 278 people were apprehended entering the United States illegally.  They came from 52 different countries.  The massive increase in illegal immigration — on pace to exceed a million people this year— has been an emergency for months, and Texas must continue to do everything we can to help secure our border, including deploying these additional troops.  Texas communities along the border and throughout the state are struggling to deal with this huge increase. Our health care system and schools are stretched to the breaking point, and cost increases on everything from temporary shelter and policing to street cleaning have been astronomical.

Governor Abbott, Speaker Bonnen and I  agreed that we must work with our federal partners and act now.  Congress, especially Democrats, has walked away from their responsibility and have allowed the border crisis to explode. They are ignoring the crush of people at the border as well as the safety and security of Texas communities.

Our national guard troops will work with our federal partners at DHS, who are establishing holding facilities in the Rio Grande Valley and El Paso, in the coming weeks for single adults entering the country illegally. The Texas National Guard troops will provide supplemental staffing support at the temporary holding facilities, as well as additional enforcement support at ports of entry. These combined efforts will help make Texas communities more secure and will help alleviate the crush of the border crisis.

Since I have been Lt. Governor, we have allocated $2.4 billion for border security, including more boots on the ground and additional planes and equipment.  We have also added 500 permanent Texas Department of Public Safety troopers to the border region.  The cost of the additional troops for this short term mission will be fully paid for by the federal government.

Continuing the Fight for Life in Texas

In case you missed it, Senate Bill 22, written by Senator Donna Campbell, R-New Braunfels, was signed into law last week.  Senate Bill 22 closes a final loophole to eliminate any taxpayer funding for abortion providers.  It demonstrates Texas’ continued commitment to defend the most vulnerable in our society and preserve the sanctity of life.  Senate Bill 22 was one of my three priority pro-life bills passed this session.  We also passed the Texas Born Alive Infant Protection Act, which will ensure that the kind of infanticide made legal in New York and Virginia won’t happen here.  We also passed the Alternatives to Abortion Information Act, which shores up our efforts to provide adequate information to anyone contemplating an abortion.

I appreciate your continued support and all that you do. I am proud to serve as your Lt. Governor.