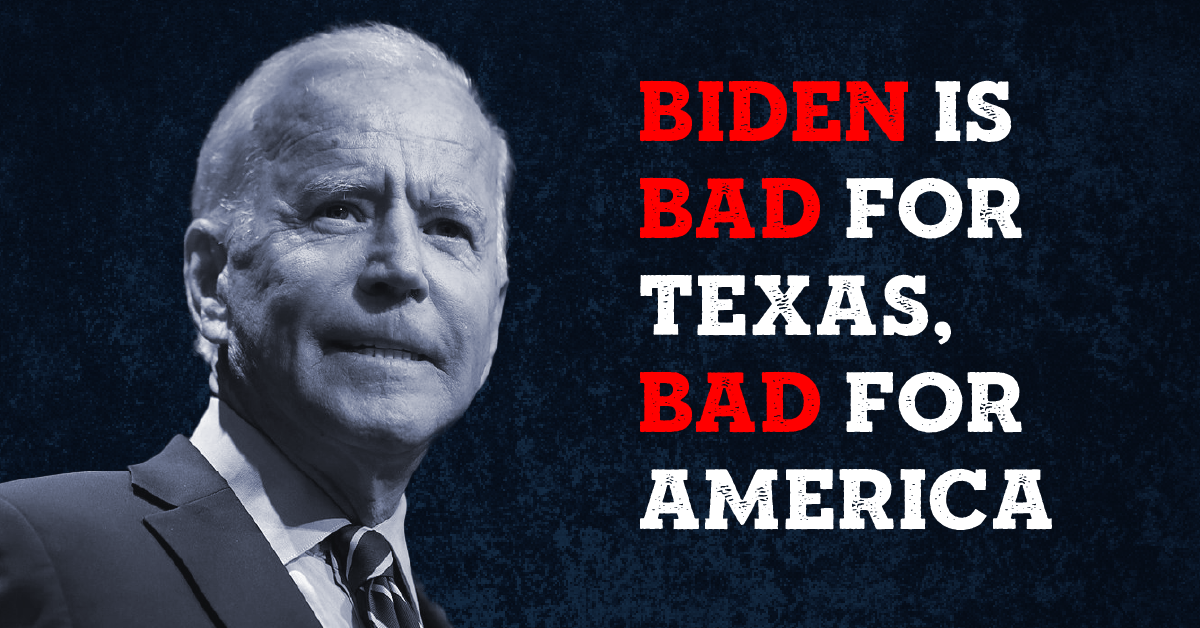 Reason #1 – energy: Joe Biden embraces the radical left’s “decarbonization” energy agenda. This will kill jobs and industry in Texas and raise the cost of electricity and gas at the pump. Want to know what the future would look like? Look at California. Rolling brownouts. High-energy prices. No electricity in places when the sun goes down.

Reason #2 – higher taxes: Joe Biden will raise taxes and repeal President Trump’s tax cuts. While campaigning, Biden told a group of liberal supporters he would raise taxes on anyone making more than $29,000 a year. Gotta pay for all his new government spending somehow.

Reason #3 – government health care takeover: Biden will expand Obamacare and use taxpayer dollars to create a new program “like Medicare” with no co-payments. The socialists are calling it the Public Option and Medicare for All.

Reason #5 – free college: Joe Biden embraces the socialist agenda to make some college free. The federal government will take on massive debt by paying tuition and paying student loans. This won’t apply to everyone. So those who still have to pay for tuition will face massive increases.

Reason #6 – 2nd Amendment: Biden would require Americans to register ownership of some firearms. He has talked about raising the age to buy a firearm and he favors ‘red flag’ laws which even many in law enforcement consider tough to enforce and selective.

Reason #7 – China: As VP, Biden led the effort to grant China “Most Favored Nation” status and supported their membership to the WTO which eliminated 3.4 million American jobs. What more will he do for China as president? Source.

Reason #8 – the economy: As VP Biden has failed to lead the country out of the Great Recession. Instead, he oversaw the slowest economic recovery since WWII. Source.

Reason #9 – leading a socialist Democrat Party: From defunding the police to raising taxes, to amnesty for illegal immigration, to enacting the Green New Deal, Biden has become the vessel for the left’s agenda. Source.