When I was sworn in for my second term alongside Governor Greg Abbott in January 2019, I said that “we have a moment in time, right now, to set the stage for an even greater Texas for future generations”.  Now, as 2019 is coming to a close, I want to thank our senators for passing many of the goals I laid out in my inauguration speech.  We succeeded in enacting historic policies – property tax reform and reduction, teacher pay raises, and reforming the broken “Robin Hood” school finance system that will benefit Texans for years to come. We protected life, liberty, the Second Amendment and the Constitution, maintaining the bedrock conservative principles that make Texas strong.  However, there were several important conservative priorities that passed the Senate, but did not pass the House, so there is still work to be done the next time we meet in Austin.

We also had some times of tragedy in 2019, including the white terrorist shooting in El Paso, the senseless Midland-Odessa shooting and the terrible church shooting at the West Freeway Church of Christ in White Settlement on Sunday morning.  We lost more law enforcement men and women in the line of duty –a shocking 41 law enforcement heroes in just the last five years in Texas.  This mass violence continues to shock us all and breaks our hearts.

We are praying for the families of the victims of the most recent shooting at the West Freeway Church — and the entire White Settlement community — but we are also grateful for the unparalleled heroism of the two parishioners who rose to save their fellow parishioners and took out the shooter in less than 6 seconds, saving countless lives.  In a press conference with law enforcement and the pastor of the church on Sunday evening, I spoke about Senate Bill 535, passed this year by Senator Donna Campbell, R-New Braunfels, which made it crystal clear that licensed gun owners in Texas can carry to church, as well as Senator Kelly Hancock’s, R-Richland Hills, Senate Bill 2065 that passed in 2017, which exempted churches from the state fees that private institutions must pay to form their own security forces. This was helpful to churches like White Settlement, which has a volunteer security team.  Here is a summary of my remarks at the press conference.

Here are some of the landmark bills we passed in 2019, as well as some of our important political victories and a few of the best Texas moments of 2019. 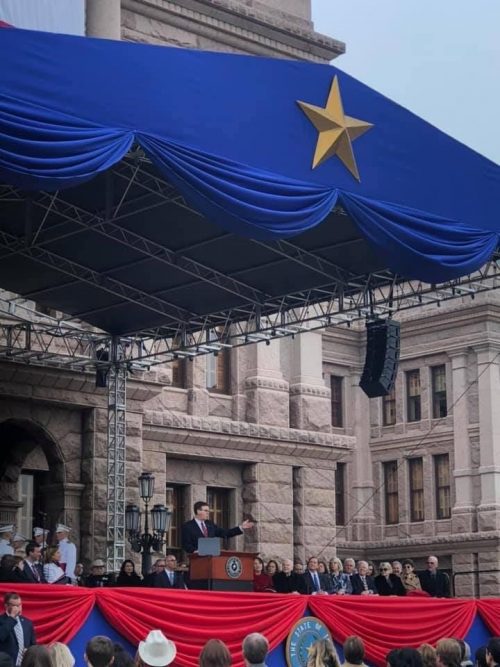 Passing Property Tax Reform – I first ran for public office to push for property tax reform, and in 2019 the first property tax reform legislation in 40 years was signed into law. For the first time ever, legislation passed that requires cities and counties to give you a vote if they want to increase their revenues more than 3.5%.  Many of you have seen your property taxes for homes and businesses grow 8, 9, 10 percent a year.  No more unless you vote on it.  This will slow the growth of your taxes, saving you significant money year after year starting in 2020.  Here’s an op-ed I wrote about Senate Bill 2.

School Finance Reform and Teacher Pay
Since conservatives took control of every branch of government in 2003, we have been fighting to transform school finance so that funding is linked to the child, not the school district.  With the passage of HB 3 this year, we finally achieved that goal.  We also gave every teacher a $4,000, on average, pay raise, made the Teacher Retirement System actuarially sound, cut Robin Hood funding in half and last, but by no means least, provided $5 billion in additional property tax relief, which will reduce the M&O portion of your property tax bill.

Ending Surprise Medical Billing & Reining in Drug Prices
Ending surprise billing for medical emergencies when patients have no choice of which medical provider they see or which facility they visit was one of the most important steps we took in the last legislative session.  The San Antonio Express-News wrote an editorial about it yesterday.  We also reined in prescription drug prices, establishing a consumer price check that will ensure that when the price of a prescription drug spikes more than 15% a year, Texans will be alerted.  This is the most stringent requirement in the nation.

ICYMI, here’s a wrap up report I sent out last summer – everything you wanted to know about the 2019 Legislative Session. 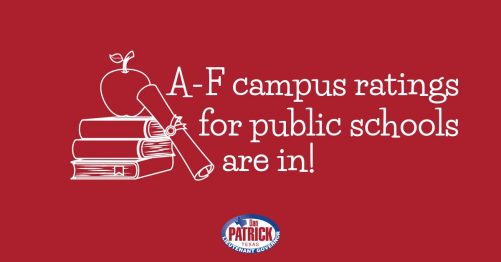 A-F Ratings for Public Schools across the State
One of my personal priorities in 2013 when I served as Education Chair in the Texas Senate, was to pass legislation to make it easy for parents to know how their schools were performing.  It was always difficult to understand why establishing A-F ratings for each of our public schools was such a difficult fight. But now that the ratings are in place, we have learned so much, especially how important this information is to parents and communities.  In addition to great success stories across the state and across every demographic group, parents and communities are working together with teachers and school districts to improve schools that didn’t score as well as they had hoped – just as we knew they would.  It is notable that 296 high-poverty schools achieved an A-Rating this year, and all the schools in the Rio Grande Valley region received either an A or a B. 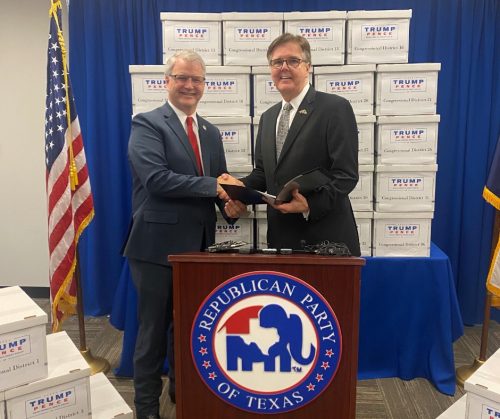 In 2019, I had the honor of officially putting Donald J. Trump’s name on the Texas ballot.  President Trump’s tax cuts have brought wages to an all-time high, unemployment (and poverty) to all-time lows, and have helped fuel even greater growth of the Texas economy.  At 4.7%, the state GDP is far above the national average, and Texas continues to rake in economic accolades on every front – best state to do business, best cities for job growth, best state for women entrepreneurs, and the best state for productivity and innovation. This November marked the 115th straight month of job gains in Texas.

Texas has added 815,000 jobs since President Trump was elected, and unemployment is at a record low of 3.4%. The average Texan saw a tax cut last year of over $1,300 as a result of the Trump tax cuts.

I am honored to serve again as Chair of the Trump Campaign in Texas. I have had several opportunities to visit with the President this year in Texas and in the White House, and I spoke at the Trump Rally in Dallas this fall. I am confident that President Trump will win Texas by an even wider margin than in 2016 and the Republicans will score big victories up and down the ballot. 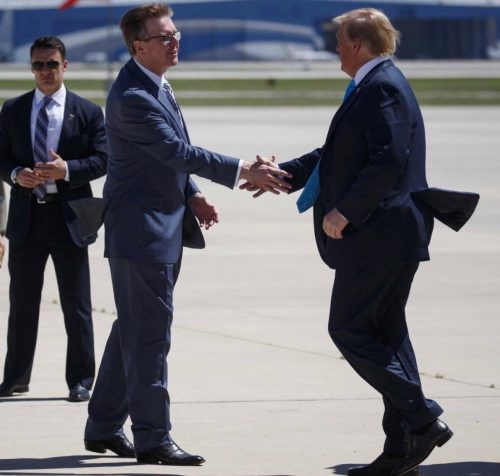 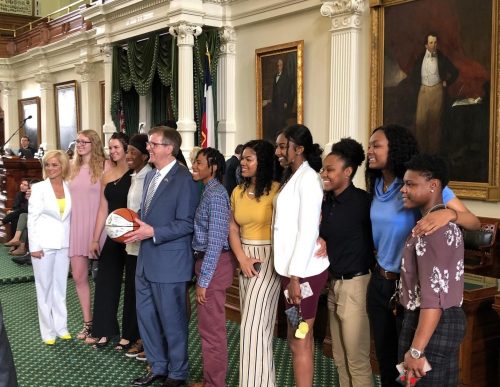 I had the privilege of welcoming many championship teams to the Texas Senate this year, but one of the most exciting was the Baylor Lady Bears – the NCAA Women’s Basketball Champions and their legendary coach Kim Mulkey.  These dynamic women impressed the nation and made Texas proud. 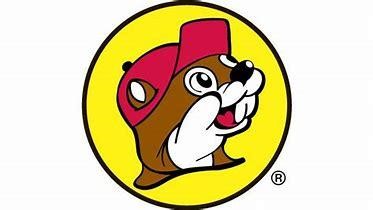 Buc-ee’s Streak Continues
As most of you know, I am a big fan of Buc-ee’s and 2019 was another great year for the great store.  Following on their 2018 designation as the best gas station in the country – Buc-ee’s was once again proclaimed to have the best coffee of any gas station in the nation.  This is the third year in a row that Buc-ee’s has won and it is not a surprise.  This unique Texas company with its Texas-sized gas stations makes us proud.

Foster Care Adoptions Break Record
When I became Lt. Governor, I launched the Faith-Based Partnership with pastors, churches and synagogues from around the state for help in finding forever families for children in foster care in Texas.  Nearly 2,000 faith based groups are now participating and these people of faith have played an important role in the record breaking number of foster care adoptions in 2019.  More children left foster care for a forever home than entered the state system — just over half of the children now have permanent homes.

As we end the year, please remember to keep the families of the victims and the people of El Paso, Midland-Odessa and White Settlement in your prayers.  The Senate Committee on Mass Violence Prevention and Community Safety will continue to meet next year to examine strategies to make our communities safer, and we will be working in the next legislative session to take action on their recommendations.

Once again, we lost 18 law enforcement officers this year who died in the line of duty, including Houston Police Dept. Sgt. Christ Brewster and Nassau Bay Police Sgt. Kailia Sullivan just this month and a Panola County Sheriff’s Deputy who was killed this morning.  Law enforcement officers put their lives on the line for us and we must never forget to #backtheblue.

We also lost a number of Texans – good friends and great patriots – this year who were committed to making our state even greater.  I want to acknowledge two – my friends, Ross Perot and Boone Pickens.  Both of these iconic men changed the face of Texas throughout their lives with vision, energy and commitment to our state.  I was blessed to know them, and I will miss them in the years ahead. 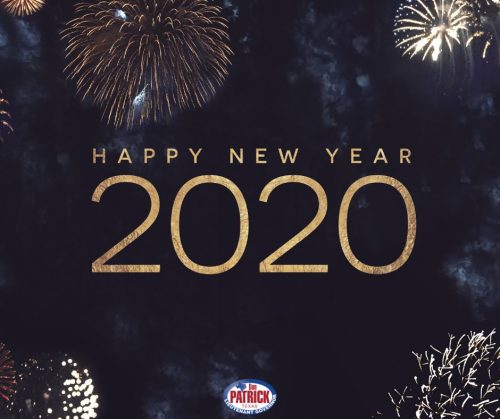 I am very proud of what we accomplished in 2019 and for all that you do for the great state of Texas.  I am humbled and proud to be your Lieutenant Governor.  Thank you for your continued support. May God bless you, your family, and the greatest state of all—Texas, in the coming year. Happy New Year!