Today I gaveled out the 2019 Legislative Session. It has truly been an historic session with landmark reforms that are good for Texans and the future of our state. When I was asked by a reporter earlier today to describe the 86th Legislative Session in one word, my answer was “teamwork.” This session wasn’t about any individual leader, it was about focusing on the top priorities of the people of Texas – property tax reform, paying teachers more and education – and not quitting until we reached that goal. We changed a century of education policy in 140 days.

Governor Greg Abbott, House Speaker Dennis Bonnen and I began the session with a joint press conference – the first time that has ever happened – announcing that we would pass property tax reform and relief for the first time in 40 years. We said we would pay our teachers more and we would address the problems in our school finance system. We delivered on that promise. Senate Bill 2 – the Property Tax Reform and Relief Act – has passed both the House and the Senate and it’s on its way to Governor Abbott for his signature. Currently, the average annual property tax bill increases 7% a year in Texas. Senate Bill 2 lowers the local rollback rate to 3.5% for cities and counties and will require an automatic election on a uniform November election date if a local taxing entity wants to exceed 3.5%. House Bill 3 puts the school district rollback rate at 2.5%. This year these reforms will save Texans an estimated  $200 on a $250,000 home and Texans will save thousands of dollars in reduced property taxes going forward.  Because of Senate Bill 2, Texans will no longer have their rising appraisals be used against them as a weapon.

A few years afterward, one of my constituents who was with me in the property tax reform battle recalled those words and made me this plaque with a broken hoe. Breaking that hoe has been our goal – I had the plaque with me on the Senate floor Saturday night when we finally passed Senate Bill 2. 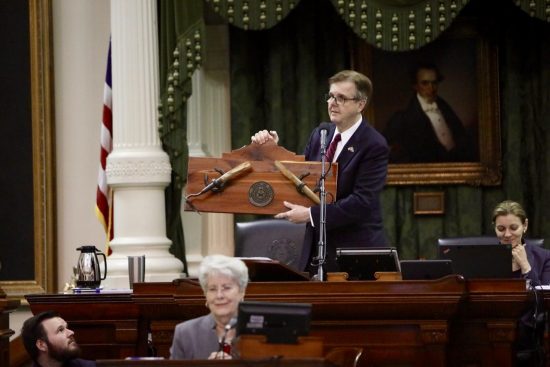 We knew the legislative session would be historic late last week when Governor Abbott, Speaker Bonnen and I announced that we had reached an agreement on House Bill 3 — a massive piece of legislation that will provide over $5 billion in property tax relief for Texas homeowners and businesses. It will also provide veteran teachers with an average raise of $4,200.

Aside from a parent, nothing has more impact on the success of a child than a teacher. This pay raise will help us retain our good teachers and recruit the best and the brightest to the profession. In other legislation this session, we also made our teachers’ retirement system actuarially sound and provided our retired teachers with a 13th check this year.

House Bill 3 also includes transformative education programs that will bring cutting edge reforms to our classrooms to help ensure that we close the gap for those students who reach the third grade and are unable to read. It modernizes the outdated school finance formulas to reduce recapture payments – commonly called Robin Hood – by $3.6 billion. 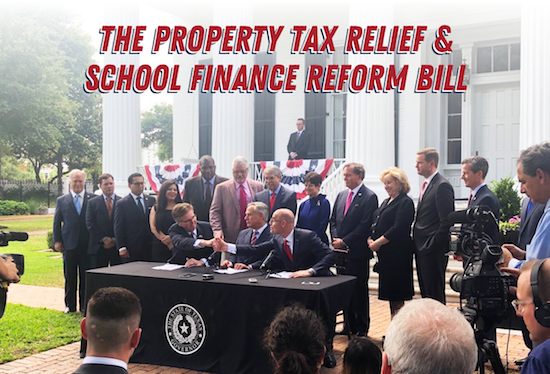 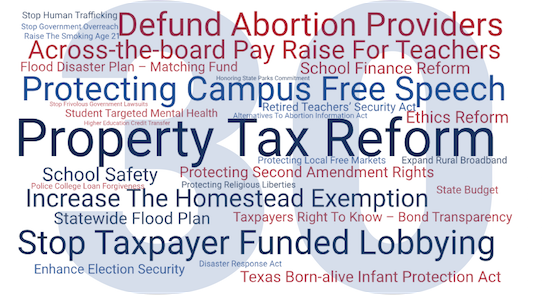 All 30 of the priorities I identified at the beginning of the Session passed the Texas Senate, and 18 of them are on their way to Governor Abbott as Senate Bills to be signed into law. Another seven of our priorities were passed as House Bills. These priorities include legislation addressing disaster response and rebuilding after Hurricane Harvey, stopping human trafficking and defending life, liberty and our Second Amendment. We passed legislation to ensure that businesses can continue to expand and create jobs and legislation that will protect consumers.

I am disappointed that we were not able to end taxpayer funded lobbying this session or pass comprehensive election and ethics reform legislation, but I have learned that it takes many sessions to be successful. As I said, I have been working on property tax reform for 16 years.  For a complete list of my 30 priorities click here.

However, just briefly, let me tell you about some legislation you may not have heard about that I am particularly proud of. We passed some important taxpayer protections, including making sure that voters know the exact cost of every bond they are voting on. The Taxpayer Right to Know Act will also provide voters with information on how much their local city or county already is carrying in bond debt.

Senate Bill 1264 will end so-called “surprise billing” for medical emergencies when patients have no choice of which medical provider they see or which facility they visit, including non-network care at in-network hospitals, and out-of-network lab and imaging work.

We also passed Senate Bill 2536, which puts a consumer price check on prescription drugs that will ensure that when the price of a prescription spikes more than 15%, Texans will be alerted. This is one of the most stringent requirements in the nation.

Thank you so much for your prayers and support throughout this Legislative Session. I am proud to serve as your Lieutenant Governor. May God bless you, your family and the greatest state of all—Texas.