Finally, after days of impeachment hoax perpetrators droning on and on with their ridiculous ideas, President Trump’s legal team took just 2 hours to make clear what we all saw – the Democrats don’t have a case against President Trump.  The impeachment sham has been a big push to try to overturn the 2016 election.  It didn’t work.  Hopefully, the Senate will be able to wrap this up by the end of next week.

If you haven’t seen this video, it says it all. 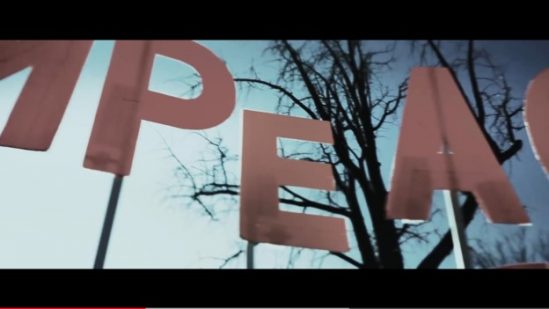 I talked with Rick Roberts at WBAP Radio earlier this week about the Senate impeachment trial and more. If you missed the show, click here to listen.

In case you missed this article in National Review, you can read it here. Here’s my official statement on the partisan election of judges. 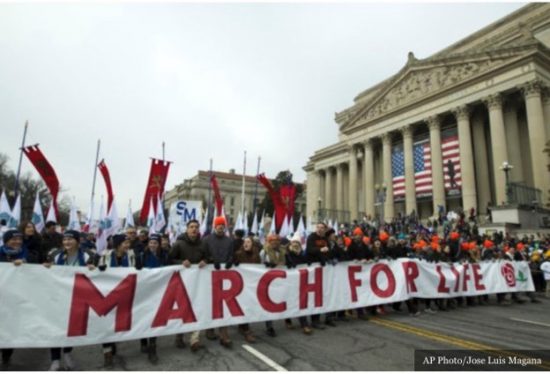 President Trump declared January 22 as National Sanctity of Life Day and also became the first president in U.S. history to speak at the March for Life Rally this week. We must never stop praying and fighting for life.  Thank you, President Trump, for your work to protect the unborn and for affirming our principled belief that all human life is sacred.

There is a very important special election for House District 28 in Fort Bend County on Tuesday.  I urge you to vote for Gary Gates in this Special Election. He will be a strong conservative voice for the district. Democrats, including Joe Biden, Elizabeth Warren and Michael Bloomberg, are working to turn this Texas House seat blue. If you live in House District 28, go to the polls on Tuesday and Vote!  Don’t let Beto O’Rourke (who is knocking on doors there) and the socialist Democrats steal this seat. 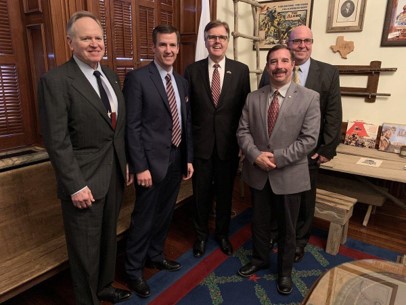 I had a great discussion with some of the leaders of the Texas Police Chiefs Association in my Austin office this week.  I always back the blue and stand up for our law enforcement. Police officers across the state put their lives on the line for their communities every day.  Pictured here is John Chancellor, Past President of the TPCA from the Shenandoah Police Department, James McLaughlin, TPCA Executive Director & Legal Counsel, Gene Ellis, TPCA President from the Belton Police Department and Will Johnson, TPCA member and Arlington Police Chief . 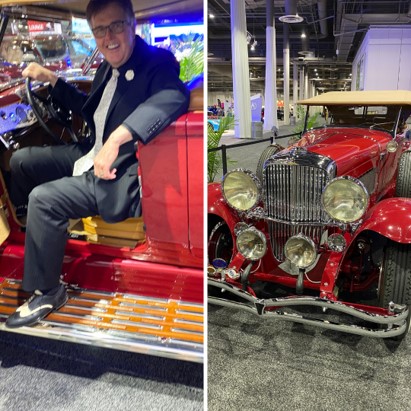 The Houston Auto Show Preview Event at the NRG Center earlier this week had a “Roaring 20’s” theme, which explains my shoes. It was a great evening, and a lot of money was raised for this year’s targeted charities:  Bo’s Place, Ducks Unlimited, Easter Seals of Greater Houston and Ronald McDonald House. Thanks to those who came out and supported these good causes. 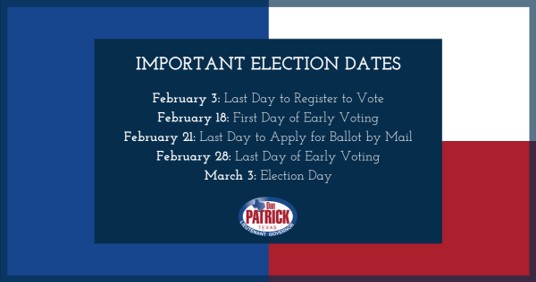 The voter registration deadline for the March 3 primaries is approaching. Mark your calendars with these key election dates.  Keep Texas Red!

I am grateful to serve as Lt. Governor.  Thank you for all that you do.  We are making the greatest state in America even greater.

Feel free to forward this email to your friends and family who may not be on our email list — they can also click here to sign up for future updates.